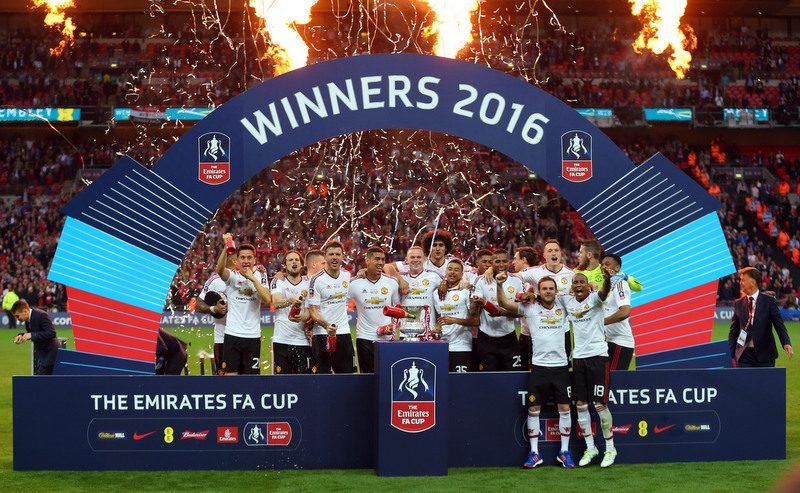 Substitute Jesse Lingard proved the hero as the England international rifled in an unstoppable volley into the far top corner after 110 minutes of action to seal the Premier League club’s first piece of major silverware since 2013 – when the legendary Sir Alex Ferguson retired at Old Trafford.

However it was the Eagles who took the initiative and the lead in the second-half; with fellow sub Jason Puncheon firing Alan Pardew’s men in front after 78 minutes, but Juan Mata netted the equaliser just moments later to take the cup final all the way to 120 minutes of play, in which United were reduced to ten-men after Chris Smalling’s sending off.

In their 19th FA Cup final, United draw level with Arsenal’s tally of 12 titles, with under pressure boss Van Gaal grabbing hold of his first honour as Red Devils manager.

Palace boss Pardew made six changes for the Wembley showdown encounter, with former Red Devils winger Wilfried Zaha starting against his former club, whilst Connor Wickham was given the nod to lead the line for the Eagles.

Meanwhile Van Gaal sprung no surprises with his starting eleven for United; although Marouane Fellaini replaced Lingard following his return form suspension and Marcos Rojo came in for youngster Cameron Borthwick-Jackson at left-back.

However, interestingly there was no matchday role for summer signing Memphis Depay in the entire 18-man squad.

The FA Cup final didn’t spring into life until the 18th minute, after a series of balanced possession in the opening stages, when striker Wickham tucked the ball past David De Gea in the United goal.

The 23-year-old won the foot race against England defender Smalling on the left-flank, and although the United man committed a clear foul, Wickham came away with the ball and ascended on the Spanish goalkeeper, only for referee Mark Clattenburg to controversially bring it back for a free-kick.

Cue a yellow card for the Three Lions centre-half.

Just after the half-hour mark; Palace right-back Joel Ward then sprinted down the right-flank, beating his marker Rojo for pace, before play was once again incorrectly called back for a foul by official Clattenburg once Ward had broken clear of the opposition’s defence.

Goalless at the interval; it could have easily have been two-nil to Van Gaal’s Red Devils as United hit the woodwork twice within 15 minutes of the restart.

Just seven minutes into the second period; midfielder Fellaini smashed the ball against the crossbar from 15 yards out, before Anthony Martial’s neat header from Antonio Valencia’s cross beat Hennessey in the Eagles net, but not his right-hand post on the hour-mark.

But then; cue the super sub – Puncheon. The 29-year-old winger, who came on in place of central midfielder Yohan Cabaye in the 72nd minute, took just five minutes to ultimately make his mark on the game in scintillating style.

After an Eagles corner was half cleared by Manchester United’s defence, Puncheon smartly controlled a lofted ball forward down the left-flank to blast the ball past a helpless De Gea with just 12 minutes remaining.

Heading into the final ten minutes, with Van Gaal’s Red Devils staring cup final despair in the face, United captain Wayne Rooney stepped up to the plate to inspire his side’s late leveller.

The England skipper did tremendously well down the right-flank, before ending his 30-yard mazy run with a delightful back post delivery towards Fellaini, who perfectly chested down the ball for Mata to bury the ball beyond Ward and ‘keeper Hennessey on the goal line.

Full-time was soon blown as neither side managed to find a late, dramatic winner, with extra-time required to determine the winner of the 2016 FA Cup final at Wembley.

Palace forward Yannick Bolasie executed the first golden opportunity in the first 15 minutes, but De Gea managed to palm away his stinging half-volley around his near post.

But after keeping his side level, ‘keeper De Gea soon watched his centre-half, Smalling, receive his marching orders after bringing down Bolasie on the halfway line for his second yellow card of the final – United were reduced to ten-men.

Into the second period of extra-time; just after Michael Carrick had flashed a header agonisingly wide of the far post, another super sub stole the limelight with only ten minutes remaining.

Lingard, who was dropped by boss Van Gaal for the Wembley showpiece, executed a ruthless volley into the far top corner following Valencia’s blocked cross to leave Hennessey helpless and United on the verge of their first piece of major silverware since 2013.

As it happens, Lingard’s spectacular first time strike was enough for United to prevail victorious in their record equalling 19th FA Cup final, with United boss Van Gaal now winning honours in England, as well as the Netherlands, Spain and Germany.

But for his opposing rival; it was a case of third time unlucky for Palace’s Pardew, who lost in two previous FA Cup finals as West Ham United manager in 2006 and as an Eagles player back in 1990 – when a certain Manchester United claimed victory in a decisive replay.

The Red Devils have now not lost against Crystal Palace in their last 21 meetings in all competitions – a tremendous run stretching back to a League Cup quarter-final defeat five years ago.