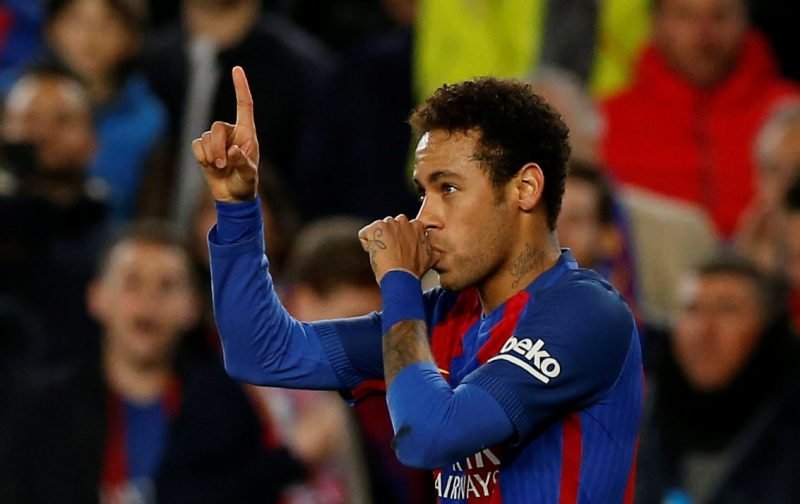 Manchester United are preparing to meet Neymar’s £173 million release clause in a bid to tempt the Brazilian international away from Barcelona, according to Sport.

The 25-year-old forward made the move to the Nou Camp from Brazilian side Santos in 2013, and has gone some way to proving his doubters wrong by continuing his sensational form in Spain, scoring 99 goals in 176 games for the Catalans.

Neymar has helped Luis Enrique’s side to back-to-back La Liga titles as well as a Champions League triumph in 2015, and has also had success at international level by helping Brazil secure a memorable gold medal at their home Olympics last summer.

And now it looks like Jose Mourinho’s United want the Brazilian star to help in their bid to return to the top of English football, with it reported that the Red Devils are ready to pay his €200 million release clause, as well offering him a €25 million a year deal.

Mourinho is looking to invest in his squad this summer in a bid to build upon the foundations laid this term, a season which has seen the Portuguese win the League Cup, and lead his side to the last eight of the Europa League.

With his men sat fifth in the Premier League as well, they have two genuine chances of qualifying for the Champions League, which is surely integral if they are to land a player of Neymar’s quality and stature.

The 25-year-old has been one of the best players in world football over the last few years, forming a formidable partnership with Luis Suarez and Lionel Messi at Barcelona, and with Chelsea also thought to be interested, there is a very real possibility that Neymar will be playing in England next term.