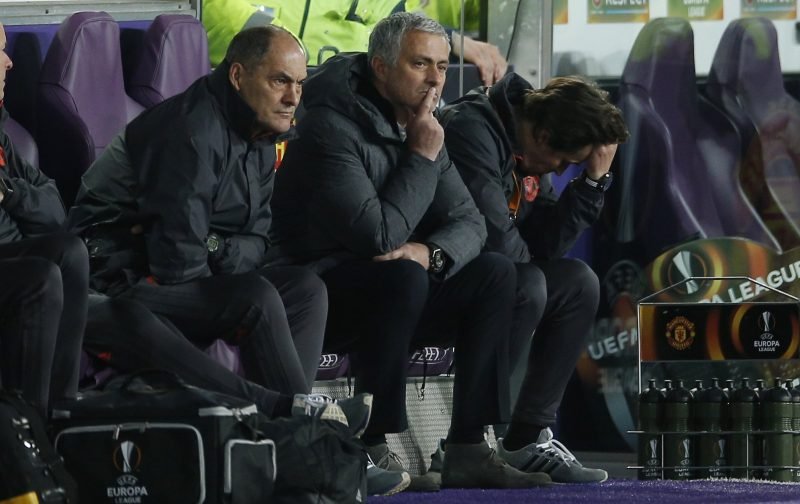 Manchester United conceded a late equaliser away at Anderlecht on Thursday night to keep their Europa League quarter-final clash finely poised ahead of the return leg next week.

Jose Mourinho’s men looked on course for victory when Henrikh Mkhitaryan fired home an away goal nine minutes before half time, and although the Red Devils created several other opportunities to put them out of sight, they weren’t clinical enough in the final third.

And it came back to bite them as a Leander Dendoncker effort four minutes from the end secured the Belgian First Division side a 1-1 draw, and means that both teams will fancy their chances of progressing to the last four when they meet at Old Trafford next Thursday.

It was the case of ‘same old, same old’ for Mourinho’s United though, who once again got into good attacking areas and created big chances, only for the frontmen to show a lack of composure in front of goal.

And many United fans took to social media after the game to express their views on their side’s display, and it’s fair to say that the overriding emotion was that of frustration…

Frustrating result tonight considering the dominant performance but we should dispatch Anderlecht with little fuss next week. #mufc

Normally drawing 1-1 away in Europe isn't a bad results. Problem is Utd have been very consistent with such results & performance. #mufc

Good all round performance tonight, disappointing to concede but showed enough to convince that the job is more than manageable at OT. #mufc

Typical Manchester United performance off late,dominated the game but failed to unlock hosts' defense.Awful is an understatement! #MUFC UEL

Nonetheless, several Red Devils fans were pleased with the performances of Paul Pogba and Marcus Rashford, although both missed great chances to give United that two-goal cushion…

Carrick, Pogba, Rashford all excellent tonight. Ibra probably had one of his best games also. Can't fault the performance once again! #MUFC

Paul pogba was absolutely amazing.. Rashford in the first half as well.. Gave the game to them .. @ManUtd #mufc

Pogba had a good game but he needs to put those chances away to get to the next level. He's gonna get slated for that and rightly so. #MUFC

And although many fans were irritated at yesterday’s display and result, they are still backing their side to get the job done at Old Trafford next week, and thus progress to the Europa League semi-finals…

We should have won the game, missed chances. But away goal is always good. Back to Old Trafford to get the job done. #mufc

Calm down this lot are not going to win at OT. We have the away goal #mufc