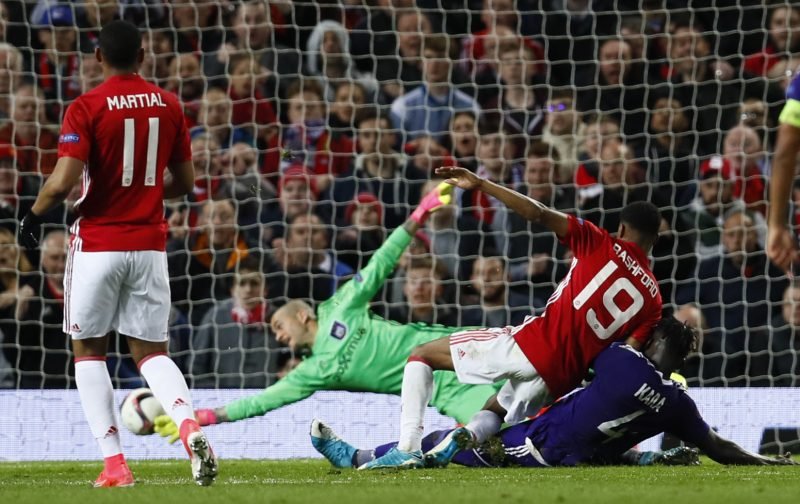 Jose Mourinho’s Manchester United needed extra time to see off Anderlecht and reach the Europa League semi-finals on a nervy night at Old Trafford on Thursday.

The Red Devils looked to be on their way to the last four when Henrikh Mkhitaryan, scorer of their only goal in the 1-1 draw in Belgium last week, netted after just ten minutes, but the visitors hit back through Sofiane Hanni 13 minutes before half time.

United continued to create opportunities but to no avail, as has been the story of their season so far, but in the absence of striker Zlatan Ibrahimovic, who went off with what looked like a serious knee injury, England striker Marcus Rashford rose to the occasion in extra time.

The 19-year-old brilliantly latched onto Marouane Fellaini’s knockdown, turned the Anderlecht defence inside out, before firing home a fine left-footed finish into the bottom corner after 107 minutes to give the home side the lead.

And it was an advantage they didn’t relinquish to book their place in the last four, and they will find out who they play in the semi-finals when the draw is made later on this morning.

Unsurprisingly, United’s late victory stimulated quite the reaction on social media, with many Red Devils supporters delighted to reach the four…

That was a fergiesque performance. We never dominated all before us in Europe, we always made it hard #mufc #ManUtd

Great performance lads. We need to be more clinical in front of goal. #MUFC

Thank god we made it through! Worry about performance and everything else another day #MUFC #EuropaLeague

Made it hard for ourselves but job done! Need a better performance vs City and hope that the Burnley game does not suffer! #mufc

However, some weren’t overly impressed with the performance of Mourinho’s side on Thursday…

This is the worst Man Utd performance ice seen in years. Wasteful, zero creativity, static and shaky at the back. Lucky to have won. #MUFC

Poor performance today, but got through in the end. Terrible finishing and too many below par players out there. Improvement needed. #MUFC

While man-of-the-match and match-winner Rashford earned many plaudits, as did £89 million man Paul Pogba after a sterling display in the midfield…

Pogba was exceptional tonight..bossed the midfield and drove us forward time after time…best performance in a United shirt #mufc

No real venom shown by the team today apart from @MarcusRashford ! Best performance by him by far. #mufc #EuropaLeague #munand

#mufc Great performance from Pogba but next level from #Rashford. Wonderful talent

Brilliant performance again from @MarcusRashford tonight, so happy for him to score the important winner #united #rashford #mufc

We are @ManUtd the biggest club in the world ! We will win the @EuropaLeague @fulltimedevils @unitedstandmufc #mufc

Please #MUFC we will never have a good of chance like we have now to win the #EuropaLeague let's bring the cup home!!!!