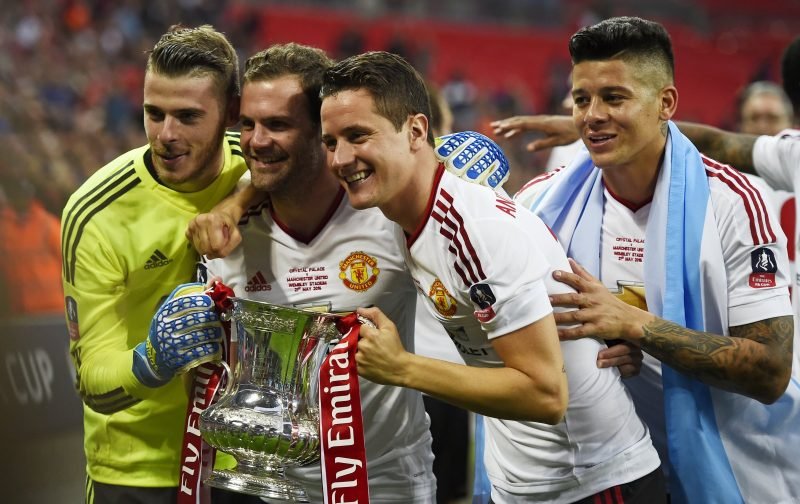 Manchester United midfielder Ander Herrera is backing his team to overcome a fixture pile-up and retain the FA Cup this season, in an interview with MUTV.

The Spanish international has been in excellent form for Jose Mourinho’s side this season, starting 20 of their 25 Premier League games, and appearing 33 times in all competitions.

Manager Mourinho said on Wednesday that his team ‘could be in trouble’ come the end of the campaign should they progress in both the FA Cup and Europa League, and following their 3-0 win over Saint-Etienne on Thursday night, they look set for a run in the latter.

They’ll also go to Blackburn Rovers tomorrow confident of reaching the quarter-finals of the FA Cup, a week before they take on Southampton in the League Cup final at Wembley.

And, despite playing four times in ten days, Herrera is confident that United’s strength in depth can take them to a 13th FA Cup title this season, a competition he values greatly.

He said: ‘It’s a massive competition. It’s the oldest competition in England and I think it’s the most amazing cup in the world because of the organisation. The last four play the semi-final one game and then the final at Wembley too and it’s fantastic for the fans.

‘Every club wants to win the FA Cup. We want to keep playing in it and win away against Blackburn.

‘We have very good memories from last season and I’m very optimistic because we have a very good squad.’

Herrera and United go to Blackburn tomorrow in the fifth round of the competition (4.15pm kick-off), before they take their three-goal advantage to Saint-Etienne on Wednesday night for the second leg of their last 16 clash in the Europa League.