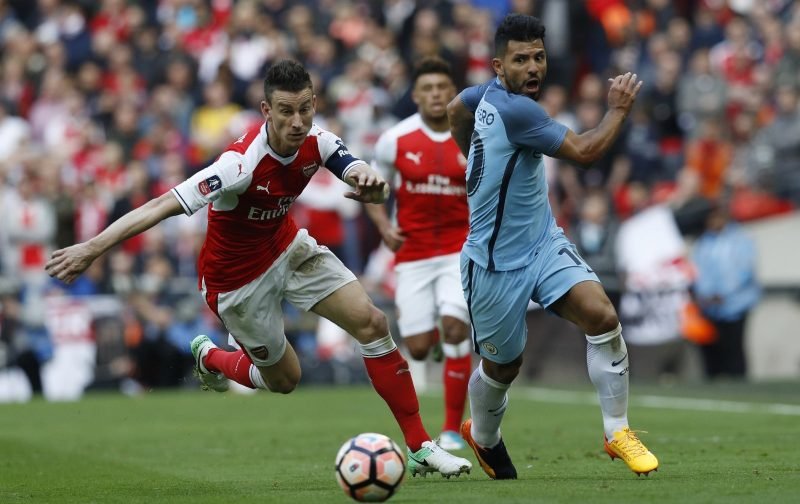 Arsenal defender Laurent Koscielny is being targeted by Manchester City, as well as French side Marseille, according to French TV programme Telefoot (via The Sun).

The 31-year-old has been an integral cog in the Gunners backline since his move from Lorient back in 2010, making 288 appearances for Arsene Wenger’s side, including 210 in the Premier League.

Koscielny didn’t make an immediate adaptation to English football in his early years at Arsenal, but he has since gone to become one of the best centre-backs in the division, and one Wenger simply must keep hold of over the summer.

Yet recent reports suggest that Pep Guardiola’s City and Ligue 1 outfit Marseille are looking to lure the defender away from the Emirates Stadium this summer.

The Citizens conceded twice more in the league on Sunday by drawing 2-2 at Middlesbrough, which means that they have now conceded 37 times in the Premier League this term, and although that’s not a horrendous amount, it is a significantly higher tally than leaders Chelsea, second place Tottenham, and neighbours Manchester United.

And with the future of captain Vincent Kompany far from certain despite recent solid performances, and both John Stones and Nicolas Otamendi having made critical errors during the campaign, Guardiola will surely be thinking about how best he can strengthen his backline.

And Koscielny, a reliable and accomplished centre-back with plenty of experience at this level, might be ideal for the former Barcelona and Bayern Munich boss to ready the Citizens for a sustained title challenge next term.