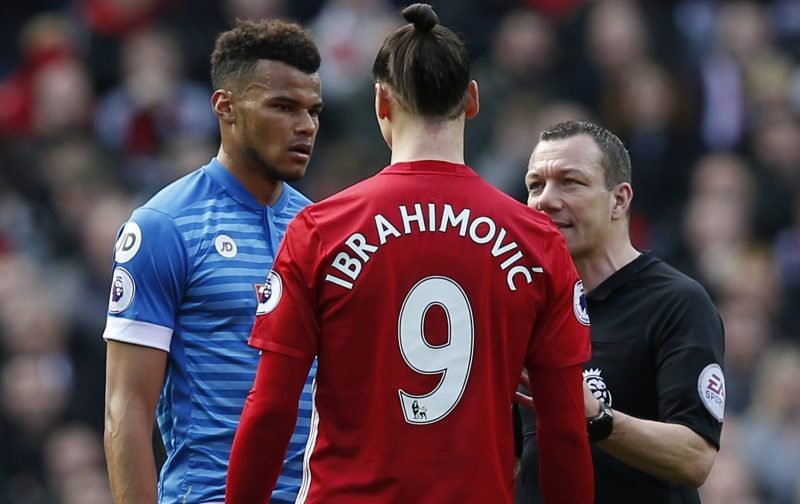 Bournemouth defender Tyrone Mings has been slapped with a five game ban for catching Zlatan Ibrahimovic’s head with his boot in their 1-1 draw with Manchester United on Saturday.

The Cherries defender has been given a suspension two games longer than that handed to the United striker, who admitted to a charge of violent conduct against Mings, having elbowed the former Ipswich man moments after the first incident.

Whilst Bournemouth have reacted angrily to the ban, claiming that there is no grounds for punishment as there is no way of proving that their man’s actions were intentional, Red Devils fans have taken some joy from the announcement.

A few fans have claimed that The FA have not been strong enough with their ban:

@GaryLineker Ibra gets 3 match ban for elbowing his foundation but the stamper on his head only gets 5. That decision by The FA Mings #mufc

Just imagine the outrage if Ibra had stamped Mings! He'd be banned for 9 months!! #MUFC

Mings has got away with that you can't question the intent, he looks at Ibra 3 times #afcb #mufc

Bournemouth upset about Mings getting 5 Game Ban for Stamping on Zlatan…I think Mings got a squeeze still, shouldve been more!#BFC #MUFC pic.twitter.com/KwRPf4Jlod

Whilst other fans have simply poked fun…

And finally, one fan is glad that the Cherries man has been punished for the potential damage that could have been done…

Rightly so that Tyrone Mings has got a 5 game ban, he could of done some serious damage to Zlatan's elbow. #bfc #mufc