After a four-game unbeaten run in all competitions, many Manchester United fans would’ve hoped that their season was starting to turn.

However, the Red Devils were brought back down to earth with a bump at Bournemouth on Saturday as they lost 1-0 at the Vitality Stadium.

The defeat saw them sit ninth in the table – before the 3pm kick offs – having collected just 13 points from their 11 matches so far.

It also saw Ole Gunnar Solskjaer’s side match an unwanted club-record as they have now failed to keep a clean sheet in any of their last 11 Premier League away games. 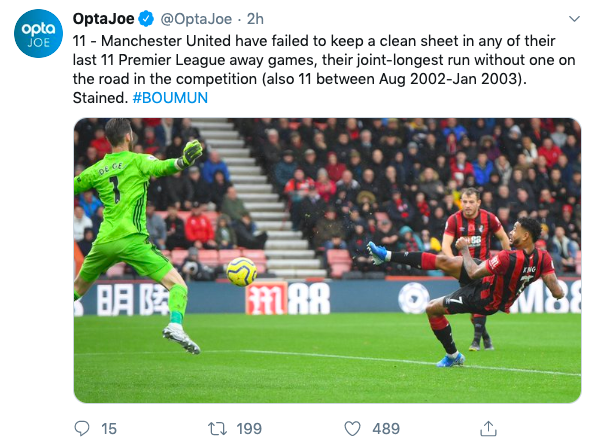 The last time Manchester United went that long in the top-tier without recording a shut-out on the road was between August 2002-January 2003.

Solskjaer’s team did end an eight-month wait for a Premier League away victory against Norwich last weekend but this setback now leaves them just five points above the relegation zone.

Next up for the Old Trafford side is back-to-back home matches against Partizan Belgrade in the Europa League on Thursday and Brighton & Hove Albion in the Premier League next Sunday.