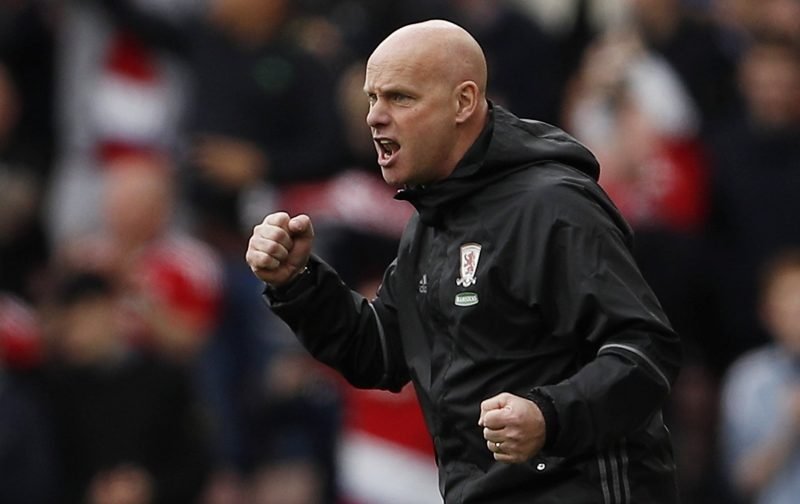 Steve Agnew’s comments that he’s due to have a meeting with Middlesbrough owner Steve Gibson about his future have provoked quite a response from the fans.

Middlesbrough’s 3-0 loss at Anfield capped off a dismal season that saw them finish 12 points from safety with the lowest number of goals scored than any other club in the top flight.

Getting rid of manager Aitor Karanka had zero effect on reversing Boro’s fortunes as they continued their downward spiral towards the Championship as caretaker manager Steve Agnew failed to rally the players or convince the fans he was the right man for the job as many seem certain he has to leave in the summer in favour of someone more capable of taking the side back into the Premier League.

In Agnew’s defence the side he inherited was almost doomed and struggling for goals and confidence with the previous manager’s focus on keeping clean sheets at all costs proving a costly approach and one that was difficult to turn around.

Gibson may give Agnew the benefit of the doubt and offer him the chance to bring in his own players during the transfer window but with so many fans seemingly against the idea and the club in need of something of rejuvenation it may be time to bring in someone with new ideas altogether who isn’t associated with the failings of this campaign.

Here’s how Boro fans reacted on social media to Agnew’s future and the prospect of him staying at the Riverside as manager:

I can’t wait for MFC to announce they’ve ‘parted company’ with Agnew, Woodgate and Gill. Jobs for the lads? No thanks…come on Gibson!

@RobSkilbeck @Leftfield @O2ApolloManc Sick of this team , this season, losers like Guzan and Agnew and the rest of this shabby lot . Ben Gibson apart

do the right thing #boro put us all out of our misery..I’ll also play for guzans flight away myself. and take Agnew with ya! #mfc #borolive pic.twitter.com/OwG2L6shU6

I’d rather play without a keeper than have Brad Guzan in goal. I’d also rather not have a manager than have Steve Agnew.

@Boro all i want to know when hes gone and a new manager announced,hes just karankas clone