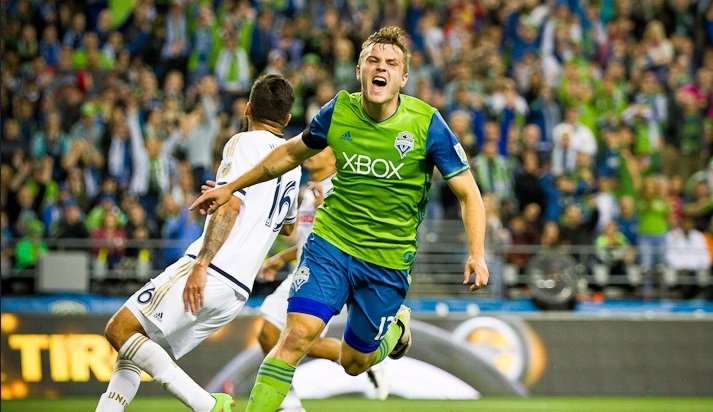 Unlike their opponents Toronto FC, Seattle Sounders’ MLS history has been shrouded in success.

Since they entered the league in 2009, they have made the playoffs every year. They won three US Open Cups in that time, reaching two other finals.

There was a Supporters Shield victory. They have broken attendance records. Sounders FC has established itself as one of the most successful clubs in American soccer history and has achieved everything with one huge exception.

There are no MLS Cups yet and no resultant stars on the jersey.

So you might think that 2016 had been an unremarkable drama-free season where they went a small additional step built confidently on the success of previous years. If you did, you could not be more wrong.

On July 24, after losing 3-0 to Sporting Kansas, the club hit rock-bottom with just 20 points from 20 games and having just been eliminated from the Open Cup.

The side looked likely to miss the playoffs for the first time in their history. Morale was low among the fans and the club had committed some self-inflicted PR gaffes of the kind you only get away with when a team is winning.

Then in July, two things happened. Finally the creative Argentinian midfielder Nicolas Lodeiro arrived. He had been Seattle’s a while, but stayed at Boca Juniors til the end of their Copa Libertadores campaign.

Frustratingly for head coach Sigi Schmid, Boca kept winning and the playmaker did not arrive till July 26 after elimination by Independiente del Valle.

The day before that, Schmid departed ‘by mutual agreement’, ending an eight-year reign at the helm.

Lodeiro was an immediate hit when he began, the game after a dismal 3-0 loss in Kansas City. The club lost just one of the next 12. Coupled with the dismal form of Portland, San Jose, Houston and Vancouver, the Seattle club began to rise in the rankings, picking them off one by one, and amazingly made the playoffs.

Popular interim head coach Brian Schmetzer was made the permanent coach and the club kept winning and with a smile on its face. Even though ex-Spurs man Clint Dempsey was soon after ruled out for the season due to an irregular heartbeat, the club continued improving with 22-year-old Jordan Morris finding both a great groove and a deadly finish where he had struggled early on.

Lodeiro continued to inspire his team-mates, centre-half Chad Marshall seemed to recover his assuredness and young Cristian Roldan looked the second best Sounders youth product ever (after Deandre Yedlin). The two full-backs Joevin Jones and Tyrone Mears improved rapidly and both produced better performances in the Schmetzer era than they had before.

The club amazingly, but deservedly, made the playoffs.

When you reach playoffs, you need two crucial qualities. The first is form. Sounders had it and they had it in abundance. The other is luck and they hadn’t really had much of that in 2016, with Dempsey’s injury and losing Obafemi Martins to China in pre-season.

Luck arrived though just at the right time as Sporting Kansas arrived in Seattle for the play-in round. On a heated night, both sides scored goals that were marginally offside. Seattle’s was allowed. SKC’s was not. In addition, aggressive Sounders midfielder Osvaldo Alonso amazingly escaped a red card when he scythed down Benny Feilhaber while already on a yellow.

Seemingly on the advice of fourth official Ricardo Salazar, Alonso continued to the fury of both Feilhaber and SKC coach Peter Vermes.

Sounders never looked back thereafter and ended FC Dallas tilt at the treble of US Open Cup, Supporters Shield and MLS Cup with surprising ease after three quick goals in the home leg.

They then beat Colorado home and away even after losing the first goal in Seattle. They even had a dream of a final at home, but Toronto’s defeat of Montreal put paid to that.

Nonetheless, Sounders’ best and easily most dramatic season ends on December 10 in Canada. It’s a season none of their massive fanbase will forget and the best may be yet to come.

Brian Schmetzer doesn’t wear a hat, but if he did, it would surely be a magic one.