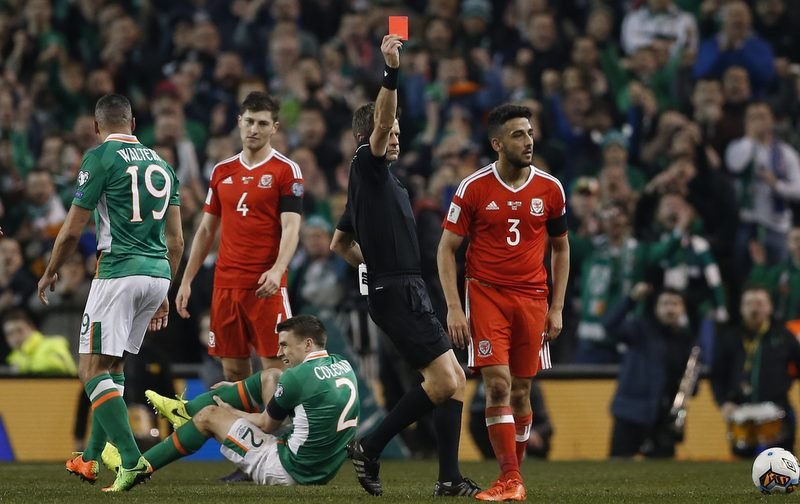 The 28-year-old was given oxygen before being carried off on a stretcher following a horrible challenge from Aston Villa defender Neil Taylor in the 68th minute.

Everton full-back Coleman, who earned his 44th cap for Ireland last night, is now set to miss Everton’s push for a top five finish in the English top-flight this term after last night’s horrific injury.

Wales manager Chris Coleman admitted after the game that left-back Taylor, who was sent off for his challenge on Coleman, was “despondent” following his dismissal.

“First and foremost, the most important thing is Seamus Coleman,” he said.

“Neil Taylor is not really that type of player, but it’s a tough one for Seamus.

“Our thoughts are with him. I have not seen it again.”

Well, plenty of Villa fans have in fact watched Friday night’s leg break over and over again, and here is how they reacted to their player’s offence.

Nothing wrong with that taylor challenge for me just really unlucky, if he gets there a split second earlier world class tackle #avfc

However, the majority of fans just simply couldn’t defend their left-back…

Looks like we’ll need a new left back after all the abuse Neil Taylor is getting on here. #avfc

Love Neil Taylor but that tackle was horrific #avfc

Oh, Taylor, what have you done. #IRLWAL #AVFC

So silly from taylor. #avfc #COYBIG