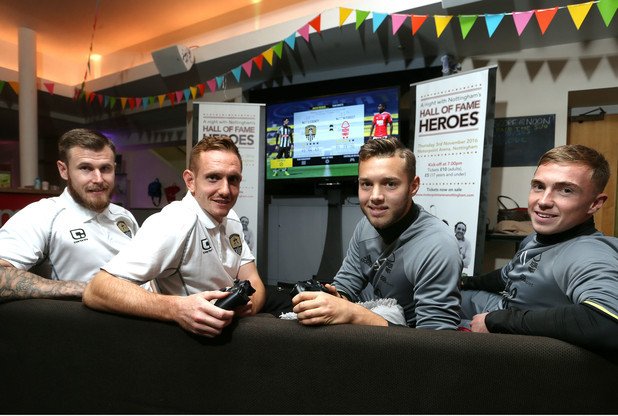 Players from Nottingham Forest and Notts County joined together to take part in a City of Football Challenge match ahead of the Hall of Fame event at the Motorpoint Arena tonight.

Forest’s Jorge Grant and Ben Osborn took on Magpies duo Michael O’Connor and Robert Milsom at FIFA 17 on the Xbox at the National Videogame Arcade in Hockley.

County’s O’Connor and Milsom took the victory 2-1 thanks to a brace from Jonathan Forte.

Footballing heroes from the past and present will join together on November 3 at the Motorpoint Arena as the Nottingham Forest European Cup winning squads and the oldest professional football club in the world, Notts County, take their rightful place amongst the world’s football elite.

The event will relive the greatest moments from Nottingham’s football history in the presence of past and current players plus the Clough, Taylor and Sirrel families.

The evening will mark the culmination of the Nottingham City of Football project set up in September 2014 to help more Nottingham people find their football in new and interesting ways, celebrating its achievements while looking forward to what’s next for football in Nottingham.

Tickets are still available online and on the night for more information go to www.motorpointarenanottingham.com/Online/halloffame