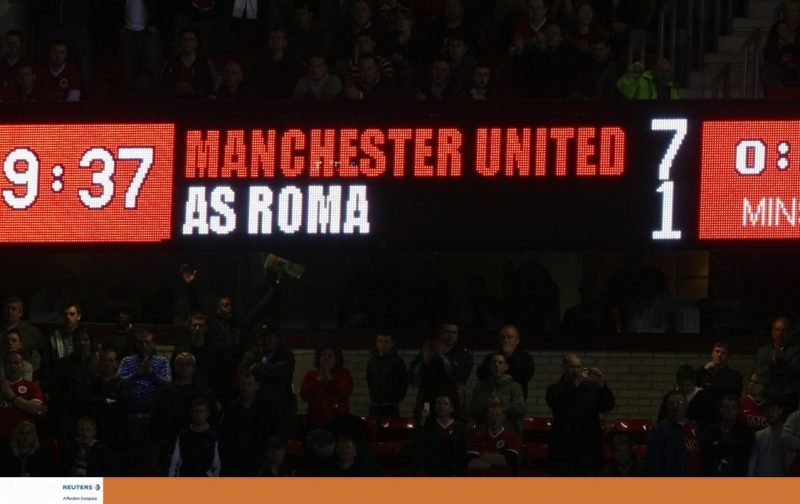 Well, a decade age to the day, Sir Alex Ferguson’s Manchester United overturned a 2-1 deficit to Roma in their Champions League quarter-final in the most spectacular of style.

The Red Devils battered the Italian giants 7-1 at Old Trafford to reach the last four of the competition, with braces from both Michael Carrick and Cristiano Ronaldo, as well as solitary strikes from Alan Smith, Wayne Rooney, and Patrice Evra completing a remarkable victory for the Red Devils.

Former England international Carrick levelled the tie just eleven minutes in with an excellent strike from the edge of the box, before Smith edged Ferguson’s men ahead on aggregate five minutes later.

Rooney made it 3-0 on the night after 19 minutes by turning home Ryan Giggs’ cross, before two Ronaldo goals either side of the break sent United 5-0 up with 41 minutes of the game remaining.

Carrick made it six with his second of the contest, and although Danielle De Rossi got one back for Roma, Evra made it 7-1 nine minutes from time to complete the rout.

It was one of the greatest displays seen in the Champions League, although it didn’t inspire Ferguson’s men to win the competition that season, as they went down 5-3 on aggregate to eventual winners AC Milan in the semi-finals.