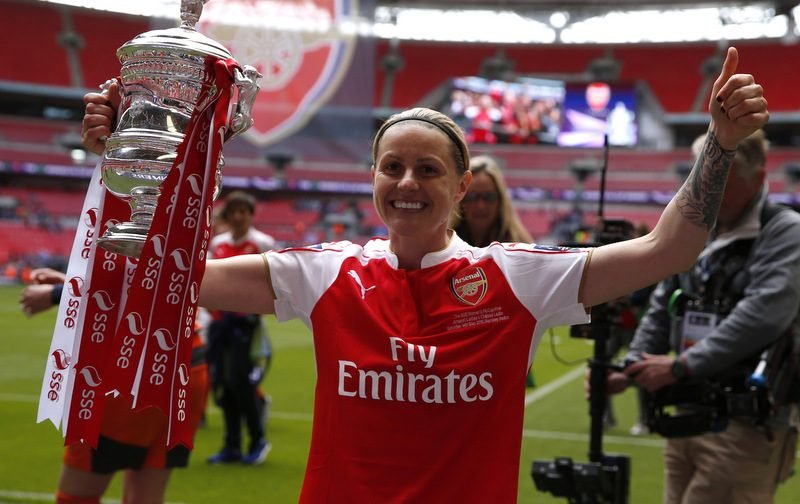 The legendary Kelly Smith officially hung up her boots as she was honoured with a testimonial match between Arsenal and an All-Star XI at Meadow Park.

The striker, who recently announced her pregnancy, came off the sidelines to take a carefully choreographed penalty, making her way through a guard of honour to net for the final time in her career.

The final score was 4-2 to Arsenal, with Kim Little, Dan Carter, Jordan Nobbs and Rianna Dean all on target for the Gunners, and England captain Steph Houghton grabbing the other for Smith’s invitational XI.

What an unbelievable day. Thank u 2 the club/players/staff/officials/stewards/volunteers/ @allthingsmgmt & fans who made a day 2 remember pic.twitter.com/zoCYPf1wT6

Elsewhere there was cup drama as Doncaster Belles beat fellow Women’s Super League 2 side Sheffield to secure their place in the Women’s FA Cup fifth round courtesy of a Courtney Sweetman-Kirk penalty.

Everton edged through against Durham, but needed penalties to do it, with the score at 2-2 after extra-time.

And Women’s Premier League high fliers Tottenham pulled off a shock, beating WSL2 Brighton thanks to a Bianca Baptiste goal.

The draw for the next round has thrown up a trio of fascinating local derbies – Liverpool take on Everton, Tottenham are rewarded by a clash with Arsenal, and Birmingham face West Brom.

Ties will be played on Sunday, March 19.