Philippe Coutinho or Isco – which one would be better for Liverpool next season? 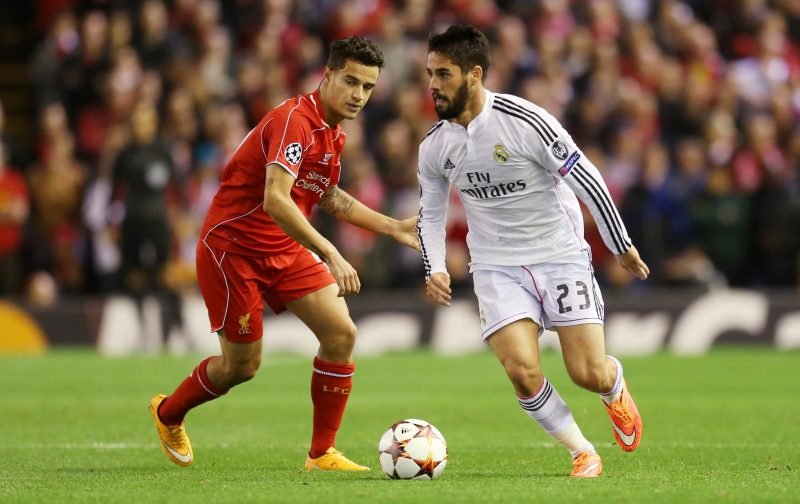 Liverpool consolidated their place in the Premier League’s top four on Monday night after winning 1-0 at Watford.

Jurgen Klopp’s men saw both Manchester City and Manchester United fail to pick up victories on Sunday, both drew to relegation-threatened sides, and so knew that three points at Vicarage Road could prove crucial in their quest to return to Europe’s elite competition.

And they did just that thanks to a moment of magic from midfielder Emre Can, whose brilliant bicycle kick from a Lucas cross sailed over goalkeeper Heurelho Gomes to give the Reds the lead just before half time.

Klopp’s men held on to open up a four-point gap on Jose Mourinho’s United in fifth, and although the Red Devils have a game in hand on the Merseyside outfit, Liverpool are in a great position to return to the Champions League after a two-year absence.

And, as a result, speculation is building about who Klopp may look to sign this summer in a bid to succeed in Europe next term, and one man they’ve been linked with is Real Madrid playmaker Isco. 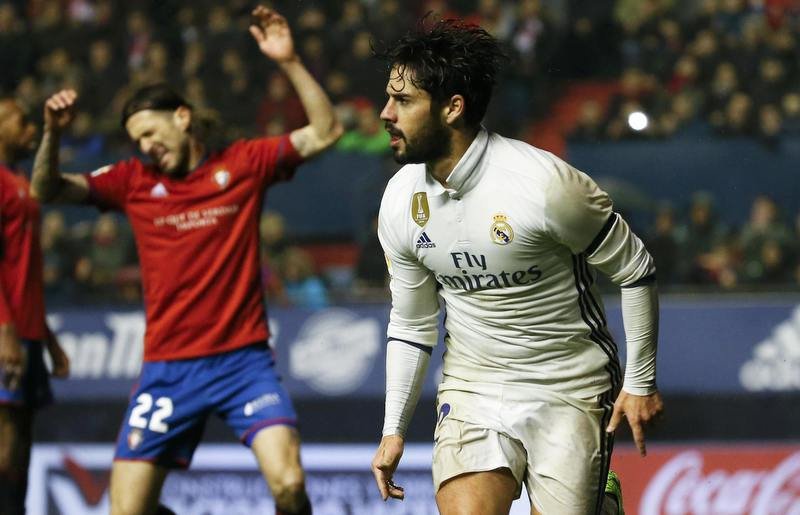 The 25-year-old has struggled for regular gametime this season under Zinedine Zidane, and thus may look for a move away this summer in a bid for regular first team football.

And one destination could be Anfield, yet it may also coincide with the departure of forward Philippe Coutinho, who the Reds are reportedly expecting to lose this summer to Spanish giants Barcelona, and thus are looking at Isco as a replacement for the Brazil international.

But this begs the question, who would statistically be the better option for Liverpool? Doing all they can to keep Coutinho? Or attempting to bring Isco to Anfield? 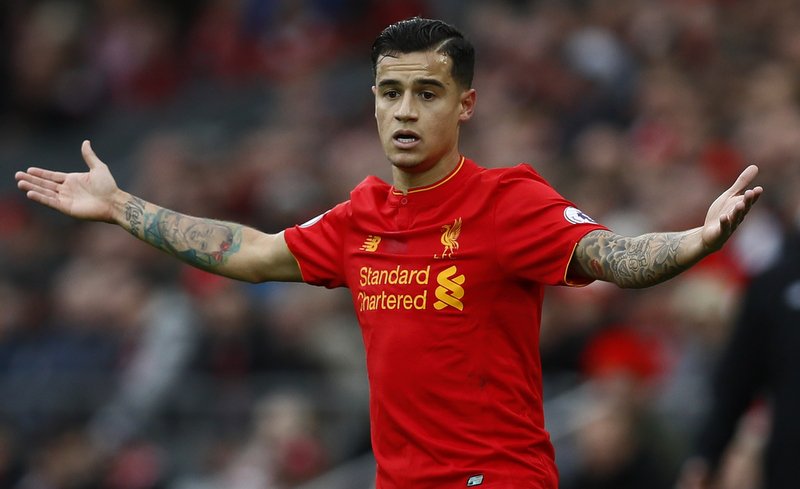 Well, in terms of this season, there is not a lot between them at all – both men have scored ten goals, both men have laid on six assists.

Liverpool’s Coutinho has created several more chances than Isco, 56 to the Spaniard’s 35, yet when you factor in that the Madrid man has played 495 fewer minutes than the Brazilian, his season has been particularly impressive.

It means that Isco has averaged a goal or assist every 92 minutes, while Coutinho is averaging a contribution every 123 minutes for Klopp’s Reds, even if he has created more chances, has completed a greater amount of chances, and has an overall attacking score greater than Isco.

And both men have been in scintillating form of late which must excite Liverpool supporters ahead of next term.

24-year-old Coutinho has scored four goals and laid on one assist in his last six appearances for the Reds, and Isco’s figures are exactly the same, although three of his goals have come in the last three matches. 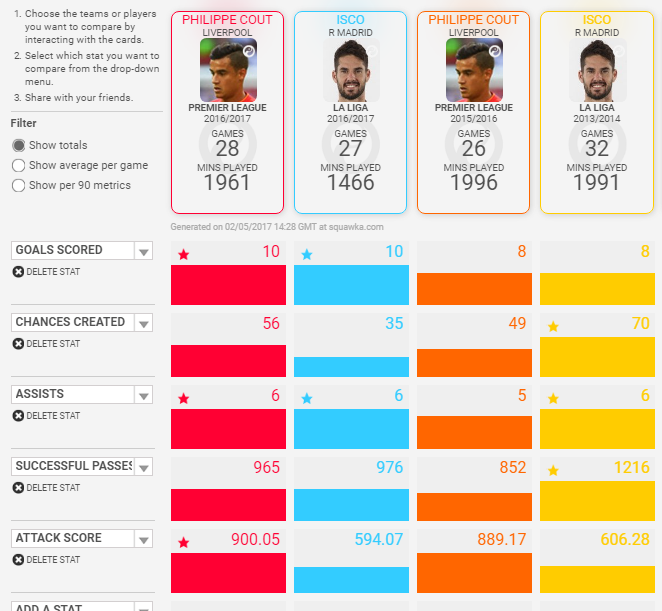 There really isn’t much to separate the two of them, but if you take a look back at their best seasons at their respective clubs, Isco just edges Coutinho statistically.

Unsurprisingly, there was nothing separating them in terms of goals scored, with Coutinho’s tally of eight in 2015/16 the same as Isco’s tally in his first campaign at the Bernabeu back in 2013/14, yet the Spaniard outdoes the Brazilian forward in terms of chances created and total assists (70 chances to Coutinho’s 49, and six assists to Coutinho’s five).

And with 362 more successful passes than the Liverpool man, having played just five minutes fewer than him during the campaign, further demonstrates his ability in the attacking third to make a telling difference, but also keep composed when under pressure.

Clearly, there are factors which will have a big say in both players’ recent seasons, yet there’s little doubt that both men are brilliant players and have their individual qualities, and would thus benefit Liverpool in some capacity.

Yet, statistically, it wouldn’t be the end of the world if Liverpool were to sell Coutinho, as bringing Isco in will likely compensate what they lose from the Brazilian.

Thus, it’s a deal Klopp should look to get done this summer.