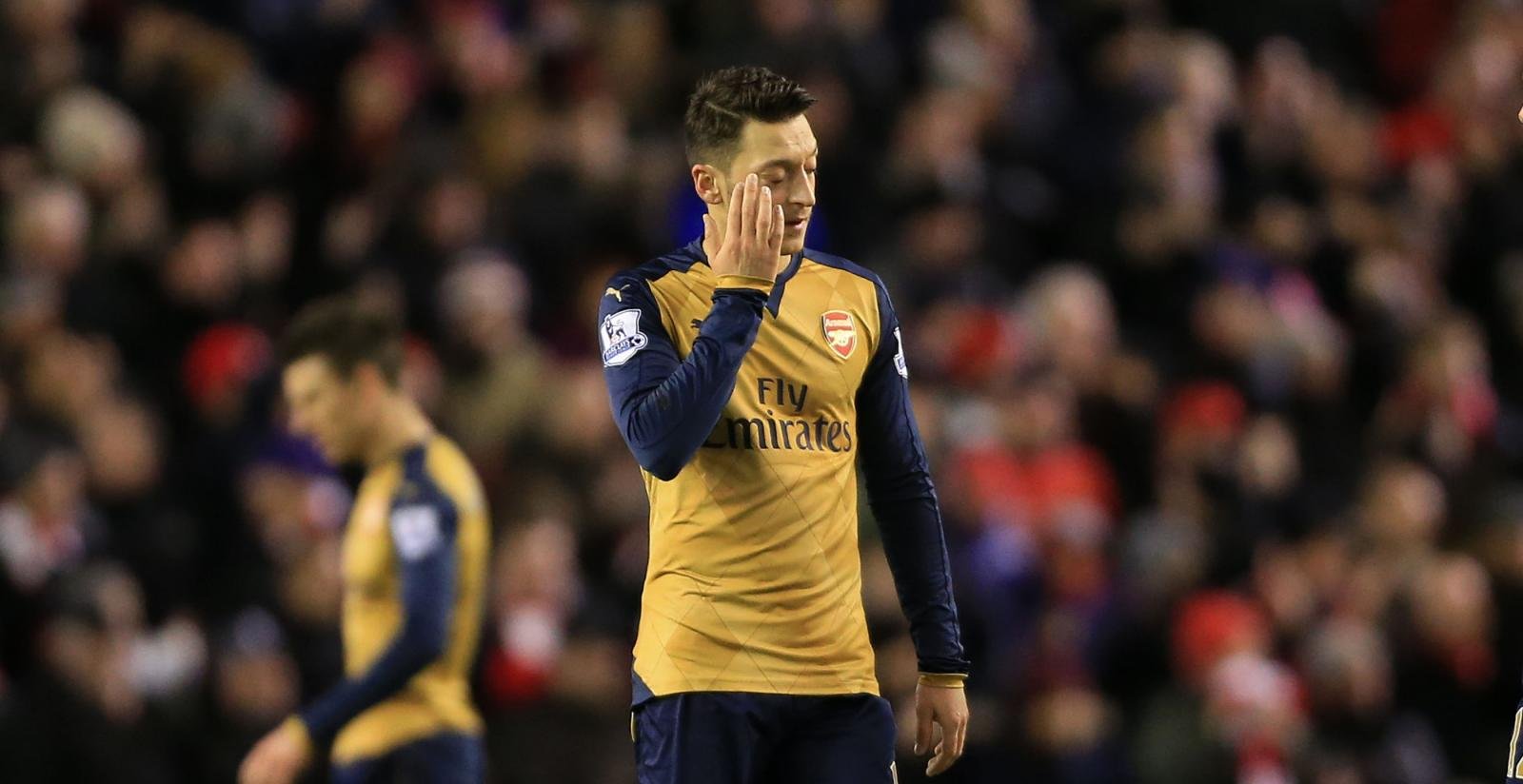 Arsenal failed to maintain their two-point lead at the top of the Premier League after Liverpool snatched a late equaliser in a  a classic 3-3 draw at Anfield.

The hosts had twice gone ahead in the first-half thanks to a Roberto Firmino brace, only to be pegged back by goals from Aaron Ramsey and Olivier Giroud.

Giroud’s brilliant effort then gave the Gunners the lead in the second-half, but substitute Joe Allen netted a volley in the final minute of normal time to rescue a point.

Jurgen Kloop’s men slip to ninth and are now five points off the top-four, while Arsenal are only top the table on goal difference, thanks to Leicester City’s 1-0 win at Tottenham.

The Foxes continued their impressive season so far thanks to a superb header from Robert Huth seven minutes from time to end a run of three games without a win.

Spurs’ third defeat of the campaign sees them remain fourth but they are now just a point ahead of fifth-placed West Ham.

Manchester City couldn’t take advantage of Arsenal’s dropped points as they drew 0-0 with Everton at the Etihad.

Yaya Toure went closest for the hosts with a header, while Leon Osman fluffed the visitors’ best chance.

Manuel Pellegrini’s side are now unbeaten in their last four but still sit three points off the top, while the Toffees, who now have one win from their last eight league matches, are 11th and eight points adrift of fourth-placed Tottenham.

Manchester United and Newcastle United also played out a classic on Tuesday evening at St. James’ Park in another 3-3 draw.

The Red Devils went 2-0 ahead thanks to a Wayne Rooney penalty and a Jesse Lingard goal, but they were pegged back through Georginio Wijnaldum’s strike and Aleksandar Mitrovic’s spot-kick.

The visitors thought they’d secured the points when Rooney netted a fine strike, but, in the final minute, Paul Dummett’s deflected shot flew into the top corner.

Louis van Gaal’s side slip to sixth, with one win from their last eight, while the Magpies remain a point from safety and have slipped below their Tyne-Wear rivals Sunderland on goal difference.

The Black Cats climbed above the Magpies and secured three vital points towards safety as they beat relegation rivals Swansea 4-2 at the Liberty Stadium, largely thanks to a Jermain Defoe hat-trick and a red card for the hosts.

Sam Allardyce’s side led after just three minutes through Jermain Defoe, before Gylfi Sigurdsson equalised from the spot.

Kyle Naughton was then controversially sent off, but they took the lead through Andre Ayew’s first goal since November.

However, the man advantage told in the second-half as a deflected Patrick Van Aanholt strike, and two more from Defoe, ensured just a second away victory which moves them to within a point of the 17th-placed Swans.

Aston Villa secured a first win under Remi Garde and first victory since the opening day of the season as they beat Crystal Palace 1-0 at Villa Park.

Palace’s winless run stretches to four and they have slipped to eighth in the table, four points behind fifth-placed West Ham, who jumped a place after winning 3-1 at Bournemouth.

Harry Arter gave the hosts the lead in the first-half, but three goals in 17 second-half minutes through Dmitri Payet, and two from Enner Valencia, turned the game on its head.

The Hammers are now unbeaten in a club-record equalling eight Premier League matches, while the Cherries, who handed debuts to Benik Afobe and Lewis Grabban (second debut), sit 16th and are three points above the drop zone after failing to win in four.

West Brom twice came from behind to secure a 2-2 draw with Chelsea at Stamford Bridge.

Cesar Azpilicueta gave the Blues the lead before a Craig Gardner strike levelled things up in West London.

A Gareth McAuley own goal seemed to have handed the points to guus Hiddink’s side, but James McClean struck four minutes from the end.

Stoke moved up to seventh in the table with a convincing 3-1 win over Norwich at the Britannia.

Gary O’Neil was dismissed in the first-half for a straight red card and the advantage told in the second period as Jon Walters, Joselu and Ryan Bennett’s own goal sealed the points after Jonny Howson had equalised earlier for the Canaries.

Mark Hughes’ Potters, who are four points off the top-four, have now won three of their last four, while Alex Neil’s visitors are 15th and five points above the bottom three.

Goals from Shane Long in the first-half, and substitute Dusan Tadic in the second, secured a comfortable win fro Ronald Koeman’s side.

Saints move up to 12th with that victory, while Watford slip to 10th after their third straight defeat.