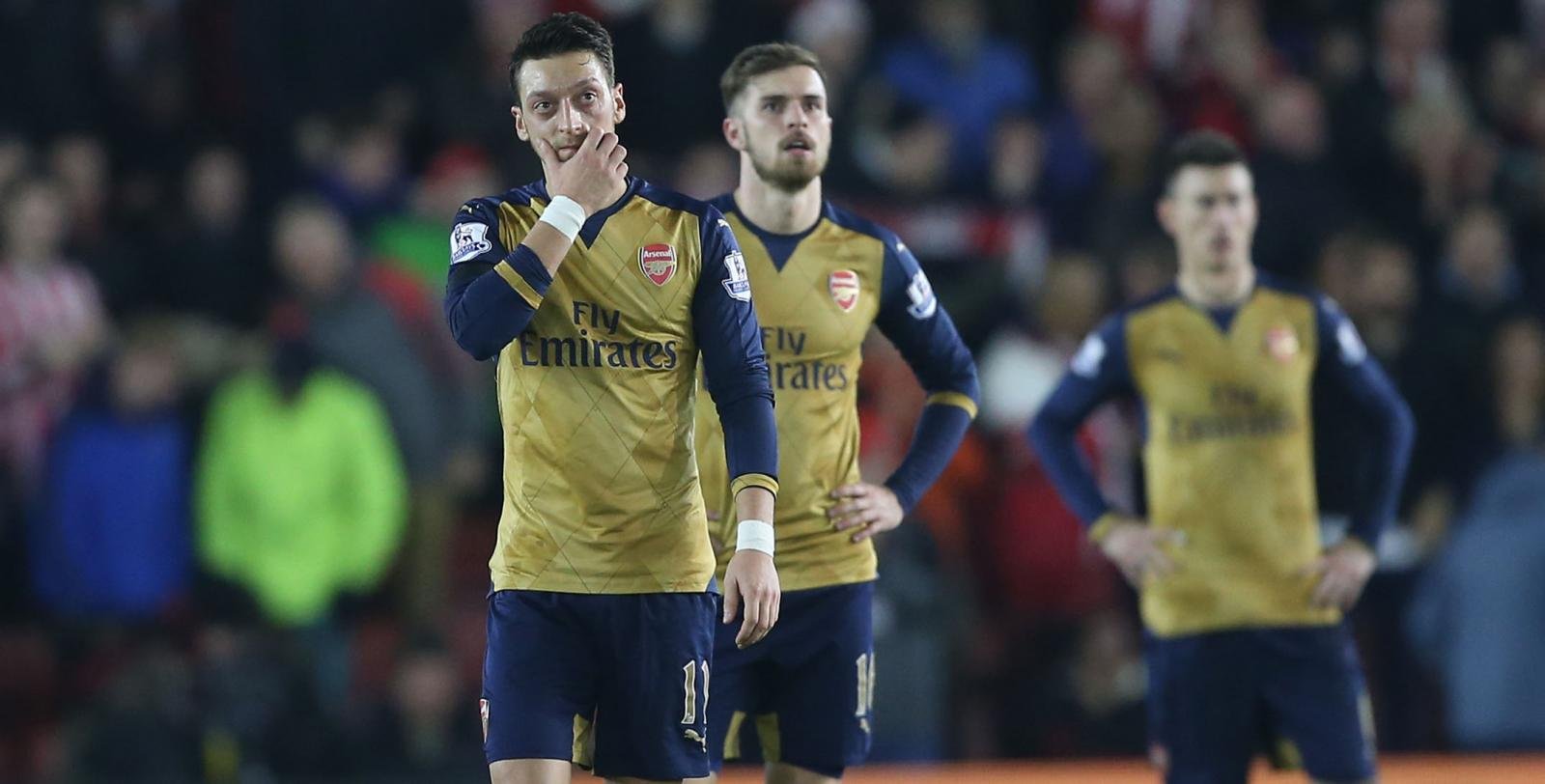 Leicester lost in the Premier League for the first time since September, and just the second time this season, as they were defeated 1-0 by Liverpool at Anfield.

Christian Benteke came off the bench to net the only goal of the game just after the hour when he stabbed in Roberto Firmino’s cross.

Despite the loss and the first match they’ve failed to score in this term, the Foxes remain top, while Jurgen Klopp’s Reds move up to eighth after bouncing back from three games without a win.

Arsenal missed out on the chance to go top as they were surprisingly crushed 4-0 by Southampton at St. Mary’s.

A stunning strike from Cuco Martina on his full Premier League debut gave Saints the lead, and Shane Long doubled that advantage lead in the second half.

Jose Fonte headed in from a corner to seal the points, before Long grabbed a second in stoppage time when he put the ball through the legs of Petr Cech.

The Gunners stay two points behind Leicester in second as Ronald Koeman’s side end a run of five games without a win.

Defeats for the top-two allowed Manchester City to bring themselves back into title contention with a 4-1 win over Sunderland at the Etihad.

The home side were 3-0 ahead midway through the first-half, with Raheem Sterling and Wilfried Bony netting from wonderful Kevin De Bruyne assists, either side of a Yaya Toure strike.

De Bruyne then got in the goals himself after the break, before Fabio Borini scored a consolation for the second week running.

City stay third, but now sit just three points off the top, while the Black Cats suffer a fourth straight defeat and are now five points from safety.

The Potters had the game sewn up by the 26th minute after Memphis Depay’s poor header allowed Bojan to open the scoring, before Marko Arnautovic struck a stunning strike into the far corner.

Mark Hughes’ side stay 11th; only outside the top-10 on goal difference, while United slip to sixth and three points off the top-four after a seventh game without a victory in all competitions.

Chelsea started life under Guus Hiddink with a 2-2 draw against in-form Watford at Stamford Bridge.

Diego Costa struck to give the Blues the lead, before Troy Deeney netted an equaliser from the spot.

Odion Ighalo gave the Hornets the lead after the break with his 13th of the season, before Costa netted his second.

The home side then had a chance to win it late on when Eden Hazard was brought down in the area, but Oscar’s penalty sailed over the bar.

The champions stay 15th, two points above the drop, while Watford stay seventh and extend their unbeaten run to five matches.

Spurs maintained their place in the top-four with a comfortable 3-0 win over Norwich at White Hart Lane.

Harry Kane, playing against the side he was once on loan with, put the hosts ahead from the penalty spot, before netting a second before the break.

Tom Carroll sealed the win in the last 10 minutes with his first Premier League goal.

Spurs are now just six points behind leaders Leicester, Norwich are only out of the bottom-three on goal difference.

Aston Villa’s search for just a second win of the season goes on as they were held 1-1 by West Ham at Villa Park.

Aaron Cresswell gave the Hammers the lead on the stroke of half-time with a driven strike, but Jordan Ayew responded for Villa just after the hour from the penalty spot.

The Villans remain bottom, nine points adrift of safety, while West Ham are now 10th after a fifth successive draw.

Tom Cleverley’s last minute header ensured Everton came away with a 1-0 win away at Newcastle.

Rob Elliot’s poor punch – after what had been an impressive performance by the goalkeeper – fell to the midfielder, who brilliantly headed the ball back into the net from the edge of the box.

That goal ends a run of four matches without a win for the Toffees and leaves the Magpies sitting in the bottom-three.

Swansea won for the first time since October with a 1-0 victory over West Brom at the Liberty.

Ki Sung-yeung’s early goal was enough to separate the sides when he tapped in Boaz Myhill’s fumble.

The win takes the Swans out of the bottom three, while Albion stay 13th and are just three points above the drop zone after five matches without a win.

Damien Delaney had a volley cleared off the line for the visitors, while Matt Ritchie headed wide for the hosts.

The point sees Palace move up to fifth, whereas the Cherries stay 14th and are now unbeaten in their last-six.