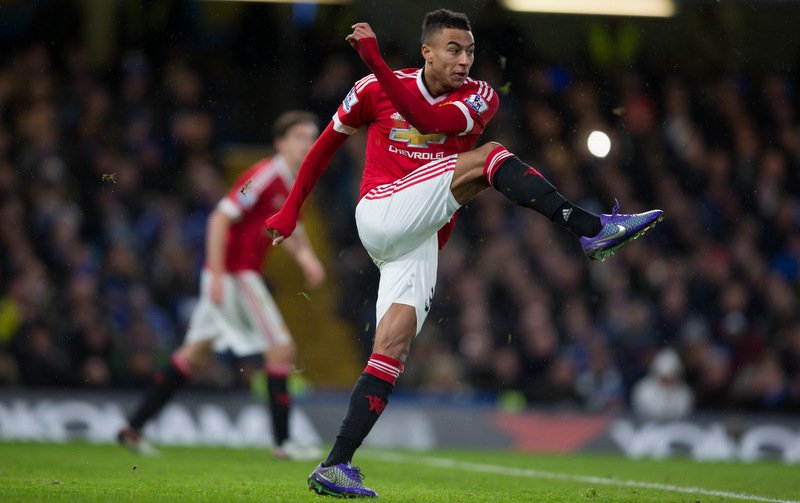 The year was 1990. The year Margaret Thatcher resigned as Prime Minister. The year England were knocked out of the World Cup by the Germans (again!). The year Lee Martin saved Alex Ferguson’s job by guiding them to FA Cup triumph when they beat Crystal Palace.

It was a significant day in the history of Manchester United. It was a day that a boyhood United fan does not understand the true meaning of. Why? Because he wasn’t even born.

The last time United won the FA Cup, Jesse Lingard was 11. Now, 12 years on, the Warrington born striker slotted home the winner to guide United to their first major trophy since the retirement of Sir Alex Ferguson in 2013.

Shoot takes a look at the boyhood Red Devil after his superb strike to win the 2016 FA Cup.

Where did it all start for Lingard?

Lingard was born in Warrington – just 35 minutes away from the palace of his childhood. Inevitably, like most young boys from Greater Manchester at the end of the 1990s, he was a supporter of the Red Devils, watching his beloved United side win the treble in 1999 at the age of six. A year later, he joined the academy at Carrington. Here he progressed through the youth ranks and, in 2003, even received guidance from a young Cristiano Ronaldo after he signed for Sir Alex Ferguson’s men from Sporting.

Here he advanced through the set up and by 2011 was a key part of the United Under-18s side that won the FA Youth Cup after beating Sheffield United 6-3 over the two legs; it was United’s first since 2003 and only there third triumph since the “Class of 92s” win over Crystal Palace 19 years earlier.

Months later, he signed professional terms at Old Trafford and the dream was complete. The next task was first team football.

But surely that first team football wouldn’t come at United straight away? That was not to be the case. And just likes greats such as David Beckham did, Lingard went out on loan. Instead of a move to Preston, his move came to the east Midlands and a Leicester City side striving for promotion back to the Premier League for the first time since 2004.

His impact here, however, was finite with him making five appearances for the Foxes in a season that would eventually end in heartbreak against Watford at Vicarage Road.

On his return to the north west, it was imperative that he made an impact under new manager David Moyes. That looked the case when he scored a hat-trick during their pre-season trip to Australia.

However, with the Reds struggling in the Premier League, Moyes needed experienced pros and not the likes of Lingard. So back out on loan he went.

What about his other loan spells?

His next loan spell took him to the Midlands again. This time, however, not the east but the west when he signed for Birmingham City in September 2013. Unlike his loan spell at Leicester, Lingard made an instant comeback and proved all the doubters wrong with a 13-minute hat-trick on his debut in a 4-1 demolition over Sheffield Wednesday – the young forward scored all four of the Blues’ goals on the day.

But after that, his impact was once again not of the greatest significance, with him scoring only one other goal, before he was recalled in January of 2014. His next step came at the AMEX Stadium on the south coast as Brighton, a side pushing for a play-off place, signed the England Under-21 international on a loan deal to the end of the season.

He eventually guided Brighton into the play-offs, scoring four league goals in 17 appearances.

The following February and he was on his way to meet with Steve McClaren and his backroom staff about a possible loan move to Derby County. After making his debut in a FA Cup tie against Reading on Valentine’s Day, Lingard played frequently for Derby in the Championship, making 14 appearances and scoring twice.

How has he performed at Manchester United this season?

It was Autumn 2015, and as former United boss Louis van Gaal exclaimed about his “army” like supporters, Lingard became a frequent member in the United starting XI, making his first appearance for the Reds in a dominant 3-0 display over an Everton side mourning the sad death of Howard Kendall on the same day.

Since then, he has become an integral part of United’s Premier League plans and, after making his Manchester derby debut in a rather tedious tie between the two in October, Lingard scored his first goal for the Reds in a 2-0 victory over West Brom in early November.

He has since found the net another two times, with the highlight being a sublime strike against Chelsea at Stamford Bridge in February, until his fantastic strike at Wembley.

Why is he so dangerous?

Lingard’s pace is electrifying and worries defences. As we have seen recently, he is fond of cutting inside on frequent occasions and taking shots from the edge of the 18-yard box.

His slick passing and fantastic through balls for the attacking force to run onto are impressive, and he has now put his name in United’s, and the FA Cup’s, history books forever.

Super Stat: Lingard’s last goal for United before the FA Cup final was in the Red Devils’ 3-0 destruction of Shrewsbury back in late February.