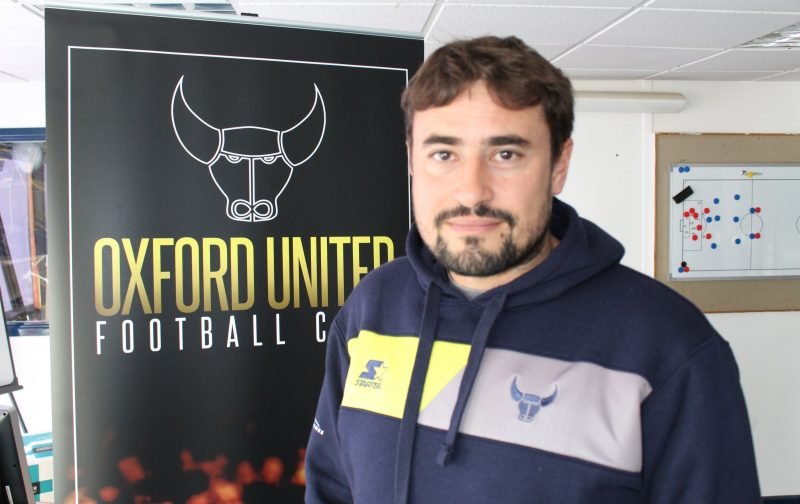 Dan Church sat down with the Yellows boss to quiz the Barcelona-born coach with some weird and wonderful questions put forward by Oxford fans on Twitter.

Dan: Right, I’ll kick off this feature, if I may. Swindon Town. What does Pep think of Swindon?

D: Correct! Is that all you want to say on the matter?

D: Excellent. This one is from @jamessordillo – Paella, or fish and chips? 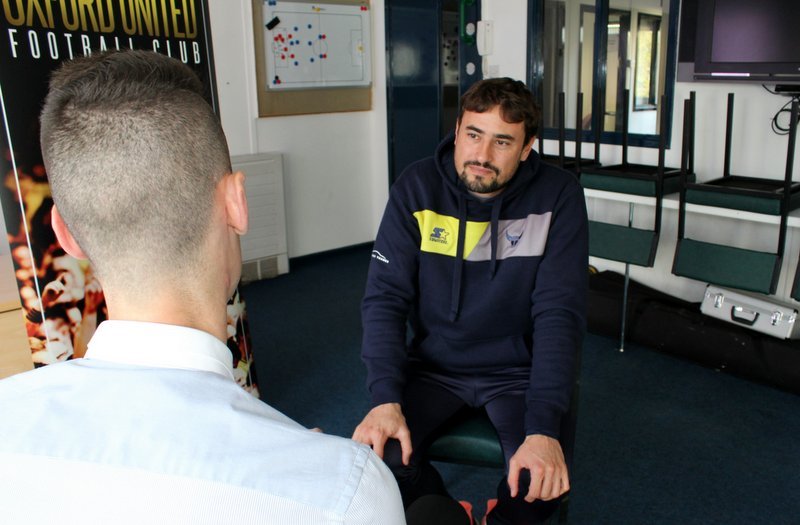 D: From @le_knight_mare – Will you be taking the FA Cup seriously, or focusing on the league?

P: We will take it serious, as much as we can, but obviously it is a tough competition.

D: Next from @1mikelterry – How do you still manage to display sartorial elegance sporting a grey zip-up hooded top underneath your suit jacket?

P: Well there are a lot of jackets that have hoodies, you know. If it is a chilly night and you can use it, I see it many times. I understand because you know when it comes to clothes and styles, it is very different, what is classed here is different maybe in Sweden. I have been everywhere and seen everything, so I now just go with what I like.

D: From @Joe_Citrone – Do you regret not signing another striker during the summer transfer window?

P: We signed Agon [Mehmeti] and we have Wes [Thomas], Jon Obika, three strikers that we would need. The club told me that the plan was always to be working with having three strikers in the squad, so I went with that advice and we have the extra one of James Roberts. We have Gino [Van Kessel] who can do it, if needed. I think it has been a bit harsh to Gino when it comes to assessing him on his game. I think it was against Bury, because Tuesday he was good and scored two goals [against Brighton and Hove Albion]. Gino can do it, so it is about having options, if it doesn’t work.

D: From @paddersoufc – What is your favourite Iron Maiden song and album?

P: Hmm, difficult because they are all really good! I really like ‘The Number of the Beast’ and ‘The Prisoner’.

D: @highlandyellow – I hear you play chess, what is your reply as Black to 1 E4?

D: @Andy_Hawkes – Why did you start with your own project, rather than continuing [Michael] Appleton’s?

P: No, I have continued with what Michael Appleton has begun, because I respected many of the old positions of the players and how the team was doing. The team wanted to play offensively and tried to get forward as much as possible. I respected that and we just added a little bit. The only thing I really changed was at the beginning, I changed the defenders’ set places. 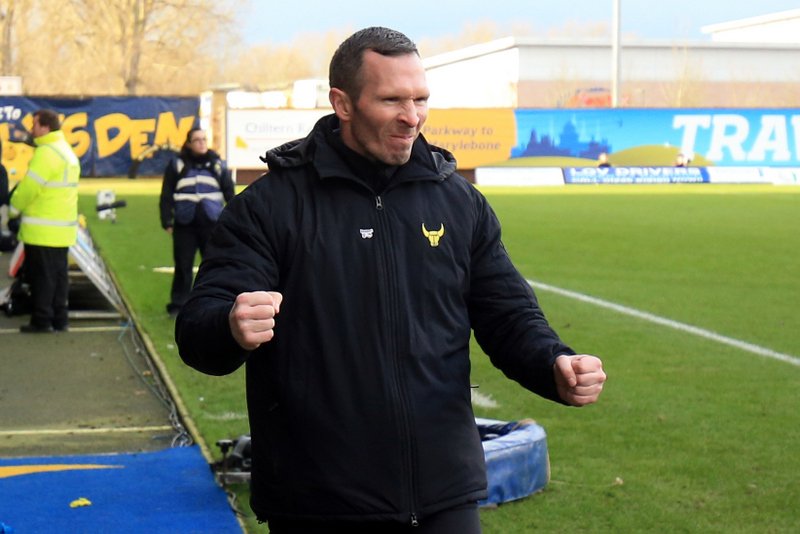 D: @FairgrieveMatt – Do you buy into the philosophy of Oxford United being a Championship club in two or three years time?

P: Yeah, I think we should have that in mind. If you asked me for a goal, trying to be in the Championship in three years, for me that would be a really enthusiastic aim to achieve.

D: @Jasperjar1 – What is your proudest moment as Oxford United boss, so far?

P: The spirit that I saw in the squad by having three games with a lack of results, even though we didn’t deserve it, because we didn’t play to lose. The spirit that the team had on Saturday [against Peterborough United] and the quality of the football and the feeling that everyone had, that is what we can do together.

D: And, worst moment as Oxford United boss, so far?

P: I think Bury. When we had that penalty, again, I think it was very, very fortuitous. The fact that they managed to close the game in ten minutes, because we were doing a really good game until that point. Apart from that ten minutes, we finished well in the game, so it was a little bit disappointing. But at the same time, it gave me the thought that we are not far off, just these things happen in football.

P: I really like the real ales. But when it comes to wine, Rioja is very nice.

P: I will tell everyone the truth. Chris and me, we had a fantastic conversation on the phone. Can we meet in person? Fantastic. He came down from Scotland, met at Birmingham Airport. Spent together about one hour, one hour and 15 minutes, talking about the game. I said Chris, I am going to give you the best offer possible we can give you. We gave him the best offer we could within our budget.

D: Making him the best paid player at the club?

P: Yeah, around there. He still has higher offers and I do respect him a lot and I saw him before the Bury game. He came to the hotel and we spoke again, because I have a very good relationship with him, he loves his football. So that is how it went. That is football. In the end, I understood. It was not his fault, he needed a club. In these situations, you cannot get to a point, like I told you before, where your best players are out of contract in the summer. Because the player will always do what he feels he has to do, and I respect that. I think Chris Maguire would have loved to stay here if we had increased our offer much more, but we just couldn’t, we have a budget. 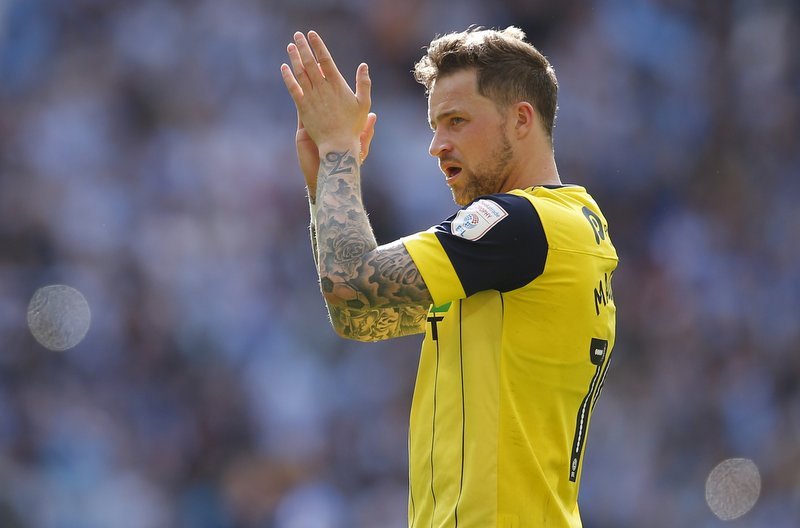 Chris Maguire joined League One rivals Bury back in July.

D: Here’s one from @1mikelterry – You have got five strikers [Obika, Thomas, Mehmeti, Van Kessel, Roberts], four custard pies. Who do you save?

P: Oh wow! I would slam them all [Laughs]. Ah, this is difficult. No one deserves it, but I would not give it to James Roberts, because he is a young player and I will have plenty of time!

D: @srsharpe – Where are you looking to strengthen in January? [Transfer window]

P: We are having recruitment meetings now, today. We have got to assess our squad, but our focus now is what I told you before, it is before we get into positions that we need, let’s analyse how the squad is now. See where we are now and see who do we need to extend options [contracts]. Before we bring in someone else, let’s make sure that everyone is set for going forward.

D: @007statto – Do you read books on leadership, sport or football? If so, what is your best one?

P: I like a lot of books. I read a lot of books. One that I really like is ‘Sacred Hoops: Spiritual Lessons of a Hardwood Warrior’, from Phil Jackson. Everyone would like that.

D: @jakey_hardiman – Does Pep keep tomato ketchup in the fridge, or in the cupboard?

D: @thomairs – Most managers shy away from social media, why are you different? And, do you write your own posts?

P: This is changing a little bit. For us, nowadays, social media, for everyone, you saw what happened in Catalonia last weekend, how powerful they are. Social media allows you to always give the message you want. Before, anyone who was doing a job, if someone is interested in knowing and has to read the press, it is always the press that is your impression on what you think I’m like. I think social media just allows you the opportunity to give the message you want, the way you want it. I think that is a tool, when it comes to that, and I think it is a good way as well to link what we do with the fans, so the fans have a little bit of insight on what we do. I think they deserve it and they like it. Obviously there are a lot of rules to have to follow. Yeah [I write my own posts].

We stood united and the team and fans earned the win they deserved to have got sooner. Proud of the character and football on show. #COYY pic.twitter.com/EhtMYkNwfc

D: Here’s my favourite, from @MHRobs – Would you rather fight one Ryan Ledson-sized duck, or 15 duck-sized Ryan Ledsons?

P: Woah! Say again… Uh, it would be really funny to be able to deal with 15 duck-sized Ryan Ledsons! Tell the guy that is a really interesting question. Difficult for me to say, but I think I prefer 15 Ledsons, than a big duck.

D: And let’s round this off with some quick-fire questions. Summarise yourself in three words for me…

P: Committed, loyal and truthful to my beliefs.

D: What is your most embarrassing moment in football?

P: You always try to behave yourself [Laughs]. We were losing after 20 minutes, at Swansea City, 4-0 at home to Chelsea, that was a bad one! We thought we might have lost 8-0 that day. It finished 5-0, so it was alright [Laughs].

D: And finally; pick one manager, past or present, who you would love to work with, and why?

P: Garry Monk. We didn’t know each other at all when we started working, and now we have become friends. That is not something easy.