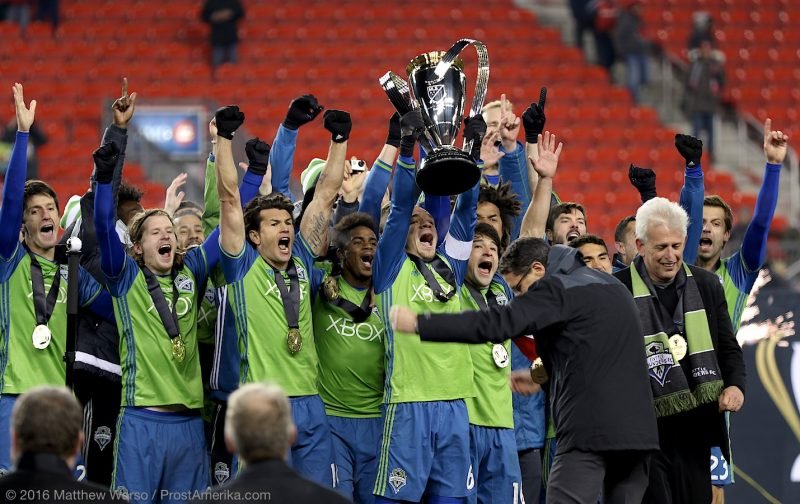 Seattle Sounders FC added a new name to the roll call of MLS Cup winners by beating Toronto FC on penalties in the final. It was their first national league title since they won the USL trophy in 2007.

Manager Brian Schmetzer, the head coach then as now, joins the ranks of men who won the League having taken over in mid-season joining legends such as Joe Walsh of Arsenal in 1933 and Cevat Güler of Turkish club Galatasaray in 2008 as just two of the names that have achieved that.

The match finished goalless after 120 minutes without Seattle offering a single shot on target. However the men in green won the resultant penalty shootout 5-4.

Schmetzer couldn’t quite believe what he had achieved, “I think it is going to take a while for it to sink in.

“What I do know are the words that I can come up with; I’m awfully proud of those guys, they are obviously very happy in that locker room. I’m very happy for the traveling support. I’m happy for the fans that couldn’t make the trip out here and see the game live.

“I’m sure there were a tonne of people watching in some of the bars that were viewing the game.”

He added, “I’m proud, I’m happy, I’m thankful for the opportunity that Adrian [Hanauer] and Joe [Roth] gave me.

“That’s just the tip of the iceberg. I’m sure that in another ten years from now I’ll be able to really reflect and make sure that I really soak this in, it was a tremendous moment and one that may never come around again.”

Canadian international Will Johnson scored the fourth for Toronto before Seattle defender Joevin Jones scored superbly to level it at 3-3.

Drew Moor put Toronto 4-3 ahead meaning Nicolas Lodeiro had to score for Seattle. He did and did so resoundingly. Four-four (4-4) after five and sudden death kicks ensued. Justin Morrow was Toronto’s sixth taker.

He hit the bar leaving Roman Torres to win the trophy for Seattle. The Panamanian converted to give Sounders the trophy for the first time in their history in front of 36,045 mostly crestfallen spectators, but to the joy of a large travelling contingent from Cascadia.

TV Commentator John Strong had described the meeting as “a pair of clubs who have raised the bar in MLS” but the first-half only lived up to its billing in terms of chippiness.

Toronto were the better side for the better part of regulation. The Reds forced three saves out of their former ‘keeper Frei, who left the club for Seattle in 2014. Only the second of those, diving low to stop a slightly mistimed Altidore header in the 31st minute was really ever in doubt.

The Reds were the better side but failed to really test Frei in the first-half, with centre half Torres, the eventual match-winner, producing one of his best Sounders FC performances.

By the hour mark, Toronto had 10 shots to Seattle’s zero. This trend continued to full-time, but the Canadian side was unable to penetrate Frei’s goal, and the game went to extra-time.

The first period of extra-time produced more Toronto domination, but still no goals. Substitute Tosaint Ricketts drove narrowly wide in the 107th minute from inside the area, a minute before Frei’s best save, clawing away an Altidore header from almost behind himself.

And so the game went to penalties, where Toronto, for all their dominance, were to be foiled by their former employee Stefan Frei for the final time.

After the game, Frei talked about his transformation from Toronto player to Seattle, “I started my career here and it was tough performance-wise, on the field.

“I was fortunate to be able to play early on which is important as a goalkeeper, but I think you play to win and obviously during my team here we had limited success so it made it difficult.

“But in the end, to be honest with you, I’m focused on my situation now, I’m in Seattle and this final could have happened anywhere.

“We had a chance to make history and this is what you live for.”

And indeed, history is what Schmetzer made.