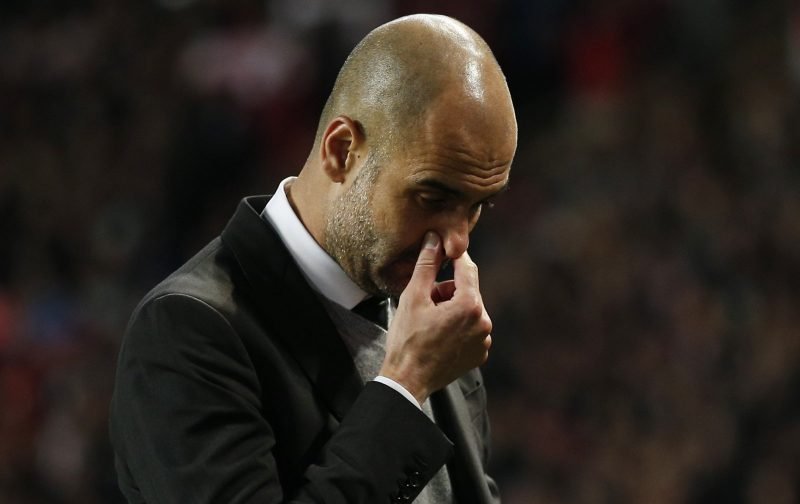 Manchester City crashed out of the Champions League on away goals after losing 3-1 in Monaco on Wednesday night to draw the tie 6-6 after two thrilling legs.

Pep Guardiola’s side took a 5-3 lead to the Stade Louis II after a remarkable attacking display at the Etihad Stadium three weeks ago, but very little of that was seen on Wednesday night, with City labouring for the large majority of the encounter.

Defeat saw Guardiola exit the competition at the earliest stage of his managerial career, and it leaves the Citizens with only one genuine chance of silverware this term in the FA Cup.

It took Monaco just eight minutes to get themselves back into the tie, with the impressive Kylian Mbappe giving Leonardo Jardim’s men the lead, which was then doubled 21 minutes later through Fabinho’s fine finish.

City struggled to get a foothold and as it stood they were heading out, only for the in-form Leroy Sane to edge them in front 19 minutes from time when he reacted quickest to stab home after Danijel Subasic parried Raheem Sterling’s effort.

It was a testing night for City which saw them exit the competition at the last 16 for the third time in four years, and unsurprisingly many supporters took to Twitter after the game to express their disappointment at City’s display, most notably in the first half…

Nothing else to say.

Shambles of a performance that #MCFC

Paid ultimately for that horrible first half performance. Can't understand why we were so slow and laboured against such as good side #mcfc

First half was a gutless performance second half was better but still embarrassing how long does this go on before something changes? #mcfc

Looks like another performance where #mcfc think 45 mins effort is acceptable.
I'll tell you it isn't and never will be.

Manager Guardiola also came in for much criticism from City fans, with his tactics and selection questioned by some…

Very disappointed with Pep's first half game plan; Lots to answer for after that tepid performance by #MCFC. Congrats to Monaco. #UCL

Have to say my first grip with Pep. Got his team selection wrong against Stoke. Got it wrong tonight.
Needed Yaya. Stubborn #mcfc

Tactics totally wrong. Pellegrini got slated for this last season. Guardiola at fault in my opinion #mcfc

Sterling, De Bruyne and Aguero anonymous but for moments. Big players show up when they're mostly needed, not the case tonight #ASMMCI #mcfc

If the real De Bruyne could turn up next game that'd be great. Poor all of 2017. #mcfc #mancity

And many turned their attentions to the rest of the campaign, placing particular emphasis on an FA Cup success this term…

Absolutely pathetic defending from #MCFC tonight. Huge summer for Guardiola. An FA Cup win keeps him par for the season at best

Disappointed that we've crashed out of the Champions League. Gotta focus on winning the FACup now. #MCFC