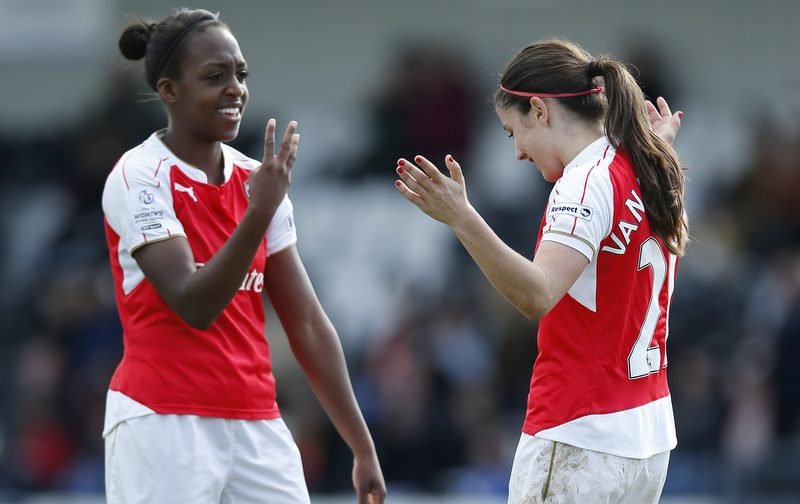 It was a less than competitive North London derby in the SSE Women’s FA Cup as Arsenal’s march to the Wembley arch began with a 10-0 victory over Tottenham Hotspur of the Women’s Premier League.

Dan Carter (2), Danielle Van De Donk (3), Kim Little, Dominique Janssen, Katie McCabe, substitutes Chloe Kelly and Beth Mead were the scorers in a one-sided rout at Meadow Park – and it was a good warm-up to the Women’s Super League 1 Spring Series campaign, which begins next month.

Little, who was playing her first competitive game since her return from Seattle Reign, was captain for the day, and revealed afterwards that coach Pedro Martinez Losa had asked the side for ten goals.

“It’s good to get the first competitive win under way,” she said.

“We’re pleased with the performance in slightly difficult conditions, with the pitch being a bit bobbly and very windy as well, but I think it was a very professional performance.”

Last season’s runners-up Chelsea also had a straightforward start to their cup campaign, beating Doncaster Belles 7-0 with strikes from Crystal Dunn, Ji So Yun (2), Ramona Bachmann, Katie Chapman and Drew Spence, plus an own goal.

Liverpool were taken to extra-time by Merseyside rivals Everton, but eventually emerged victorious by two goals to one, Shanice van de Sanden scoring the winner after Simone Magill had cancelled out Natasha Harding’s opener.

WSL2’s Aston Villa gave Sunderland a test, but ultimately fell at the last, losing 3-2, with Vicky Williams, Hayley Sharp and Lucy Staniforth on the scoresheet for the hosts, and Tasha Baptiste and Lucy Shepherd keeping the Villanesses in it to the end.

It was also a nervy ending at Eastwood Town but Notts County clung on, beating Yeovil 3-2 – Jade Moore, Kirsty Linnett and an own goal struck for the hosts, but Kelly Snook’s 86th-minute goal after Lucy Quinn’s penalty put the pressure on.