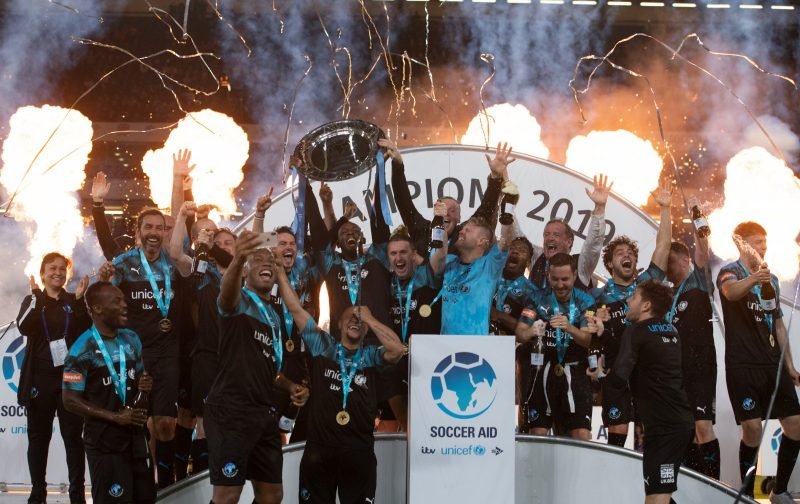 Soccer Aid for Unicef have revealed that their 2019 campaign raised a record-breaking £7.9million.

All the funds accumulated in the lead up, during and following the match held on June 16 at Chelsea’s Stamford Bridge goes towards Unicef’s vital work around the world saving lives and helping children grow up happy, healthy and able to play.

The match saw a host of A-list celebrities and ex-professionals take part as England took on a Soccer Aid World XI.

The game ended 2-2 with the Soccer Aid World XI eventually beating England 3-1 on penalties to give the management team of Harry Redknapp and Piers Morgan victory over counterparts Sam Allardyce and Susanna Reid.

Broadcast live on ITV and STV, Soccer Aid has managed to surpass previous fundraising records thanks to the public, ITV viewers, corporate partners, a host of A-list celebrities and the UK government – who matched donations up to £3million.

The total of £7.9million not only exceeds the 2018 edition by £1.1m but means there has been over £38million raised since the first match 13 years ago.

“The match continues to go from strength-to-strength raising vital funds for Unicef and all the lifesaving work they do for children around the world. Thank you to everyone who helped make this year’s event the most successful campaign yet!”

It has also been announced that Soccer Aid will return to Manchester United’s Old Trafford stadium – the original home of Soccer Aid for Unicef – in June 2020.

To be the first to hear all the latest news about Soccer Aid for Unicef register at  www.socceraid.org.uk.