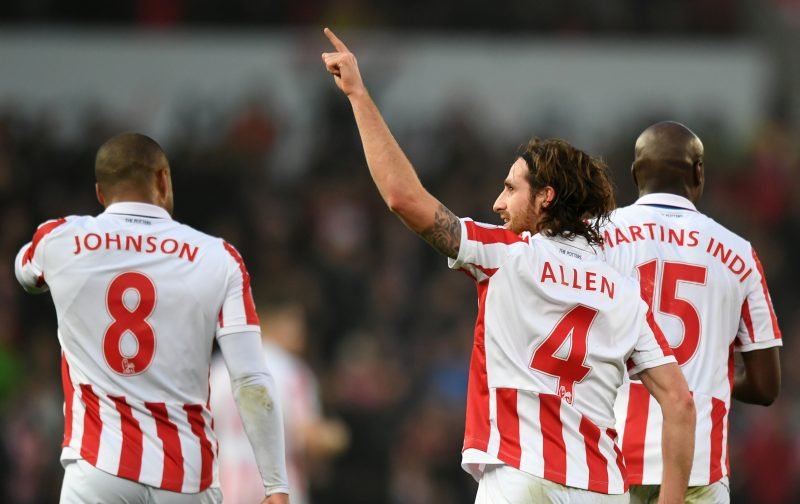 Fans of Stoke City have been left with little to cheer about of late as the club endure a pretty miserable end to the season which has seen them win just one game in the last eight.

Saturday was another game which offered few high points as despite leading twice against Bournemouth the Potters ended up leaving with just a point.

Stoke’s frustration was compounded by the fact for many of their fans felt Harry Arter should have seen red for a challenge on Joe Allen in the first half that left the midfielder needing treatment.

Mark Hughes was left fuming after the game noting: “The boy Arter is very lucky to stay on the field, you ask yourself if it was one of my players would he have got sent off and i have to say absolutely because that’s what happens to Stoke players.”

The result leaves Stoke in 13th place in the Premier League although with two games left to play and only a five point difference between 15th and eighth in the table there may be some more twists and turns before we see which side finishes at the higher end of the pack in mid-table.

After – and even during – the game much of the discussion centred on whether Arter should have walked on the 26th minute.

Here’s how Stoke fans on social media reacted to the decision not to send the Bournemouth player off:

Re the @harryarter2 challenge on Joe Allen, Press Room is split on whether it was a yellow or a red card offence, certainly a talking point

@Leannewilliams1 @BroadcastMoose @HarryArter2 No doubt would of been called an assault by the southern biased journo’s had it been the other way round.

@BroadcastMoose @HarryArter2 2 footed off the floor other way round it would have been a red. Media darlings Bournemouth strike again poor refereeing n equaliser offside

@BroadcastMoose@HarryArter2 As in between you, sticking up for your “good friend” and every one else in the room with eyes in their head?