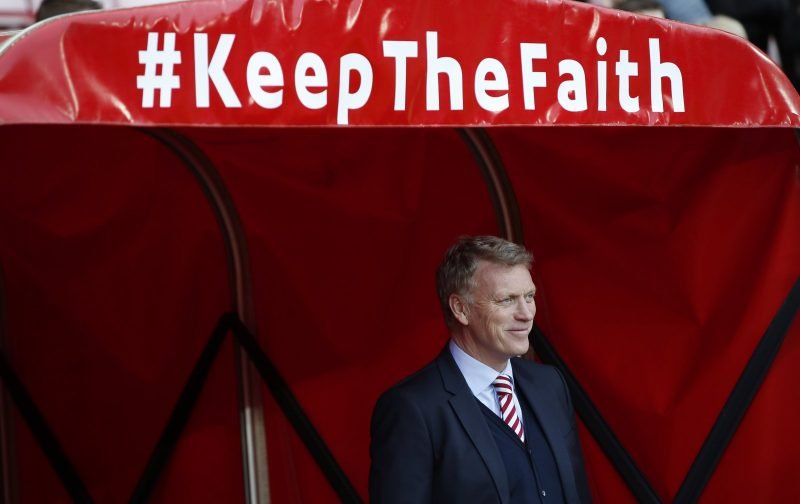 David Moyes has endured something of a torrid time since the dizzy heights of replacing Sir Alex Ferguson at Manchester United.

The former Everton boss was sacked from that role, then again his subsequent one at Real Sociedad before taking over at Sunderland, where it appeared for many months he was destined to be sacked again as the club struggled near the foot of the table, but the latest reports indicate Moyes will keep his job even if the club fail to avoid the drop.

The powers that be at the Stadium of Light have given Moyes a vote of confidence which may seem odd given the team’s current plight, but it’s worth remembering he’s not been helped by a transfer policy which has seen practically no real funds made available to bring any new players into an ageing squad that’s desperate for some fresh additions.

Here’s how Sunderland fans have been reacting on social media to the news that Moyes will be at the Stadium of Light next season no matter what:

@SunderlandEcho RIP MY BELOVED SAFC, SADLY!!! SHORT AND MOYES HAVE WON. THERE ATITTUDE SAYS WE ARE RELEGATED BEFORE WE ARE!!! I HOPE NOT FTM

Should I renew my season card? I don’t know how I feel about Moyes staying in charge if we go down.. I fully support #SAFC

Don’t care what anyone says #safc is finished under Short and Moyes end of conversation!! #sacktheboard #shortout #moyesout

If #safc get relegated & we prob will,if the club are serious about keeping Moyes on..