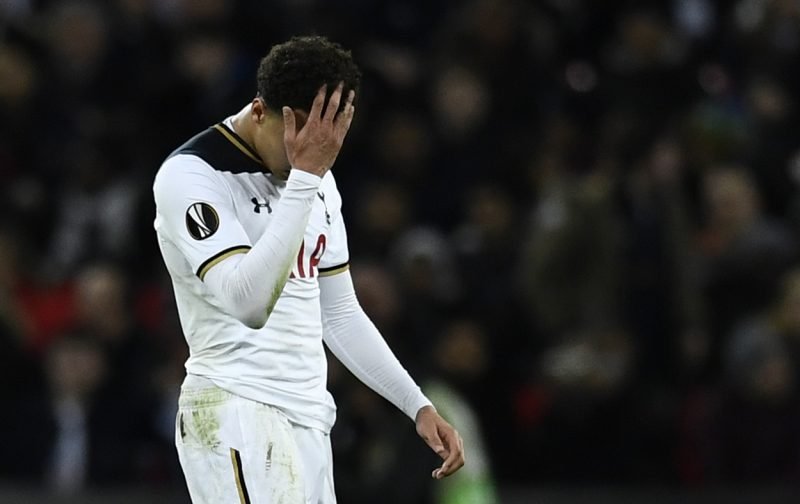 The England international was sent off for a horrific tackle on Brecht Dejaegere as Mauricio Pochettino’s men could only muster a 2-2 draw against the Belgian side in the Europa League, meaning they exited the competition after losing 1-0 in Gent the week before.

It now means that the 20-year-old will miss Spurs’ next three European matches, be it in the Champions League group stages, qualifying campaign, or even in the Europa League should they fall outside the Premier League’s top four.

Pochettino’s men are currently second in the top-flight and seven points clear of Manchester United in fifth, so it’s likely that they’ll qualify for Europe’s elite competition next term, and will thus hope to do better than they did this time round.

Spurs were knocked out of the Champions League in the group stages earlier in the campaign after winning just two of their six matches, before succumbing to Gent in their last 32 clash in the Europa League.

News of Alli’s ban from UEFA came this morning and several Spurs fans had their say on social media, with some hoping that the midfielder will learn from it as the same thing happened last season, when he was banned for three games in the league after punching West Brom’s Claudio Yacob…

@BBCSport we're losing every game at Wembley either way lads

@SkySportsNewsHQ @RickSpur as expected, but potentially damaging for Spurs' European campaign next year. Dele offers something else #COYS

@KobainUk @BenPearceSpurs Lesson was to have been learned when his childishness cost us late last year too…. Time to grow up

Love Dele Alli but his ban last season hurt us and this could well hurt us next season. Needs to keep his head. #thfc #coys https://t.co/2BACdFY282