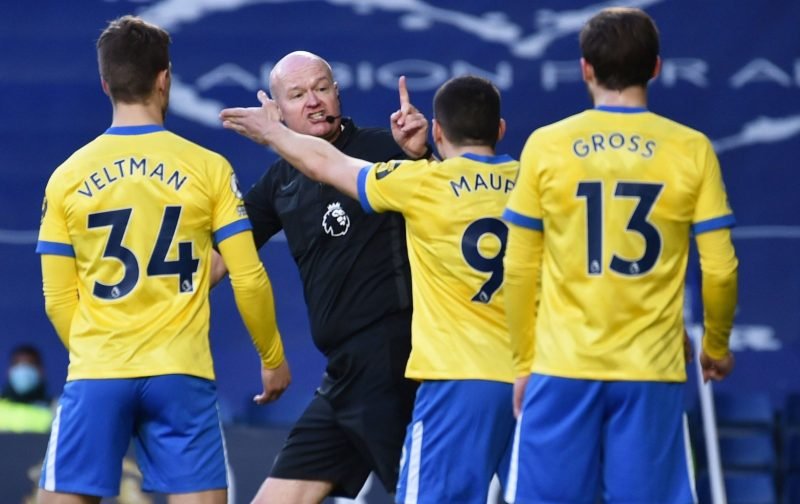 The hardest position in football is that of the referee.

The men in the middle, the law makers, the custodians of the game – we all love to hate them but the game cannot take place without them.

Highly scrutinised and very often the centre of attention, the pressure of being a referee is perhaps higher than that of any footballer.

Occasionally the pressure is too much, sometimes giving way to some shocking, and at times, hilarious moments in football.

This became apparent in West Brom’s 1-0 victory against Brighton and Hove Albion on Saturday. 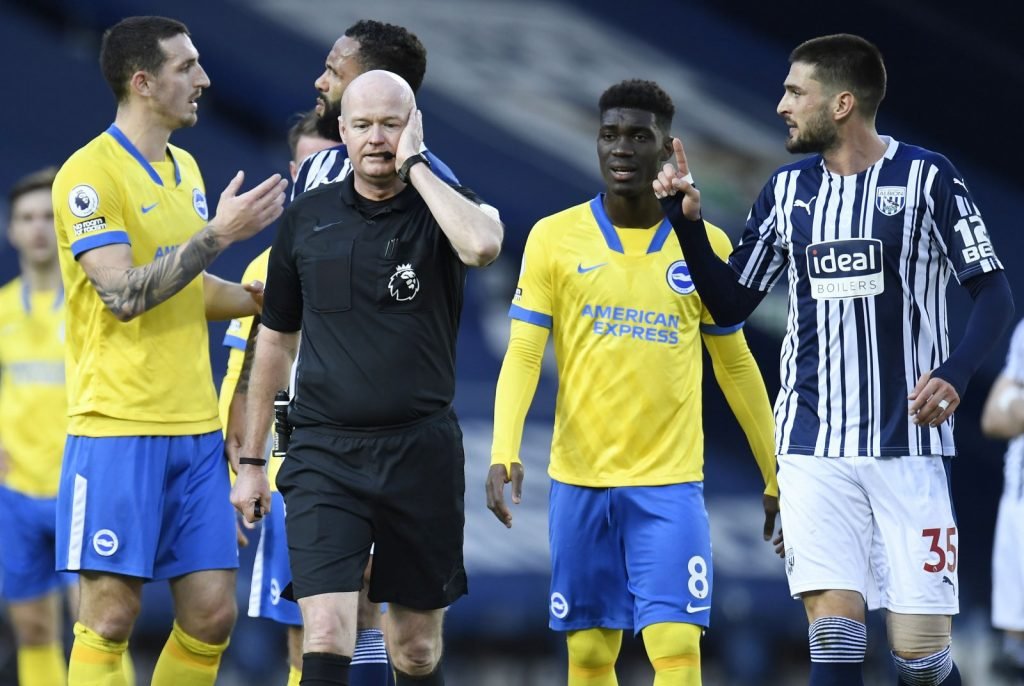 The Seagulls missed two penalties but even that was not the most memorable moment of the game.

That came in the first half, when a quickly taken free-kick by Lewis Dunk caught Baggies goalkeeper Sam Johnstone napping, sending Graham Potter’s side into celebration.

Unbelievably Lee Mason immediately disallowed the goal saying he did not blow the whistle for Brighton to take the free-kick.

Then the referee begun to hear little voices in his ear from the Video Assistant Referee (VAR) who told him he did blow his whistle – therefore the goal should stand.

Then those little voices returned and actually told him he blew this whistle twice and that he should go to the pitch-side monitor to check again.

A befuddled Mason returned and disallowed the goal telling the furious Brighton players to retake the original free-kick again. 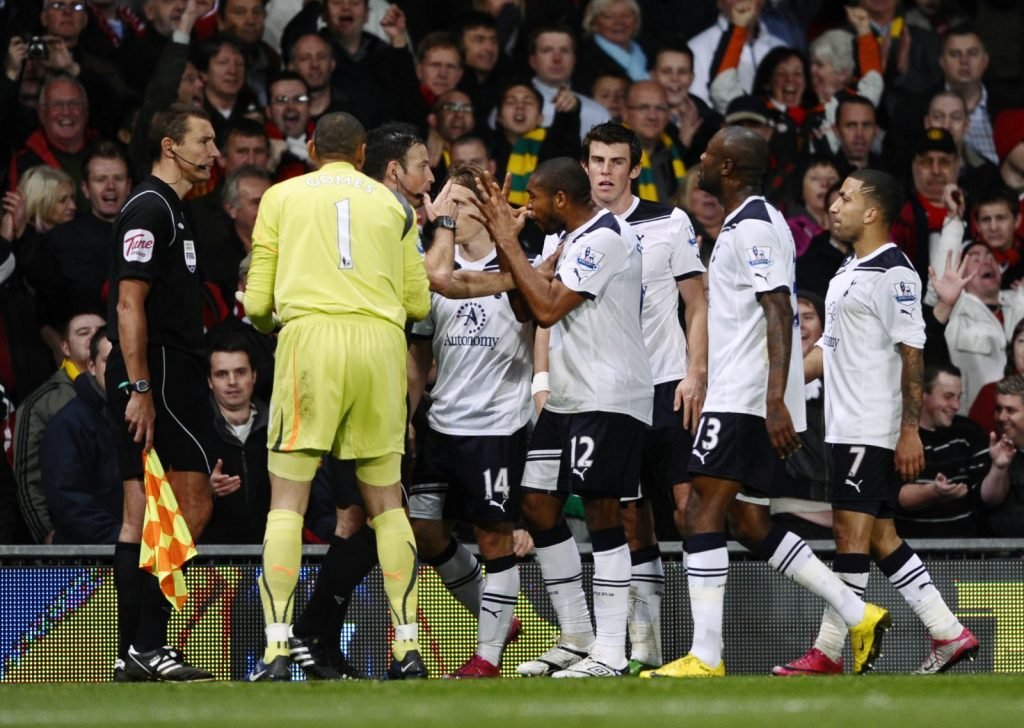 Former Manchester United winger Nani was capable of producing moments of magic at any given opportunity.

On this occasion it seemed the winger used his wizardry to wipe the memory of both referee Mark Clattenburg and his assistants.

Nani made a darting run on the right-hand side of the penalty area and appeared to be slightly clipped by Spurs defender Younes Kaboul.

Unhappy at not being awarded the penalty, Nani gathered the ball in his arms and stared at Clattenburg who simply told the Portuguese winger to get up.

But, play was inexplicably allowed to play on and Nani, who seemed to be the only person in Old Trafford aware of the situation, passed the ball into an empty net.

To his surprise and that of the approximately 75,000 people in Old Trafford, the goal was awarded, leaving then Spurs manager Harry Redknapp furious. 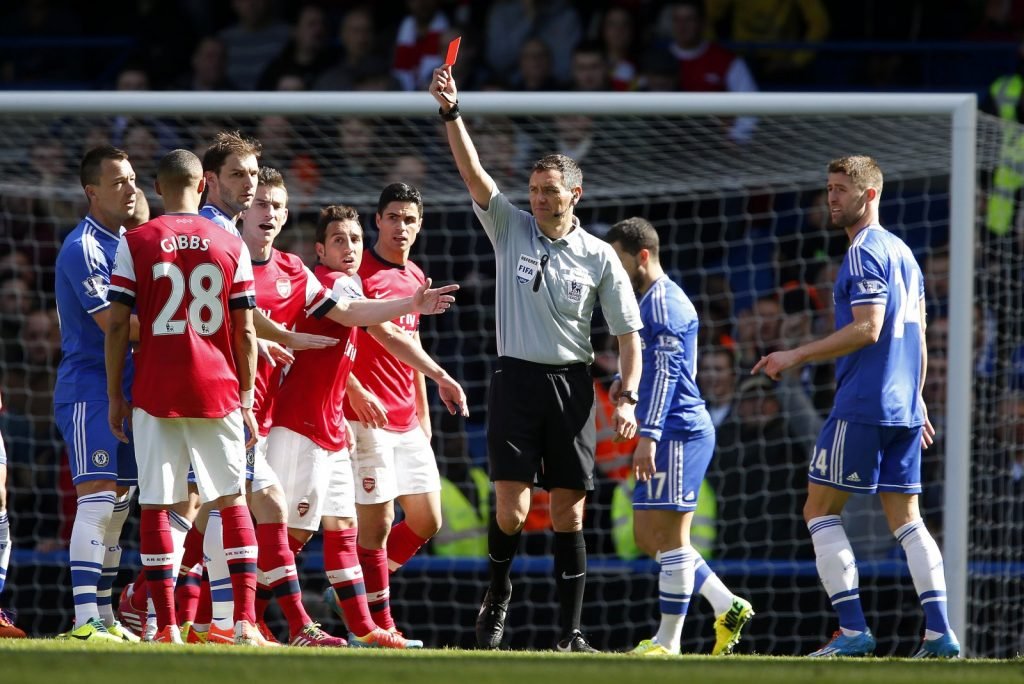 “IT WASN’T ME!” Gibbs trods off in anger.

Arsene Wenger’s 1000th game in charge of Arsenal could be one of the most memorable.

His side were absolutely pulverised by Jose Mourinho’s Chelsea side, who were three goals up within 17 minutes.

But, the biggest moment of the game was Kieran Gibbs’ 15th minute red card which opened Arsenal’s flood gates.

Eden Hazard received the ball inside the penalty area and his curling effort was kept out with a sprawling, fingertip, not by the goalkeeper, but by winger Alex Oxlade-Chamberlain.

After a brief consultation with his assistant, referee Andre Marriner awarded the penalty for handball and deemed the save to be preventing an obvious goalscoring opportunity.

Oxlade-Chamberlain was set for an early shower, but Marriner instead mistakenly gave a red card to Arsenal’s Kieran Gibbs, believing it was the left-back who kept the effort out.

Not that it made a real difference to the Gunners, who were still ploughed over by The Blues who went on to score three more, thanks to a brace from midfielder Oscar and – wait for it – a first Chelsea goal for Mohamed Salah. 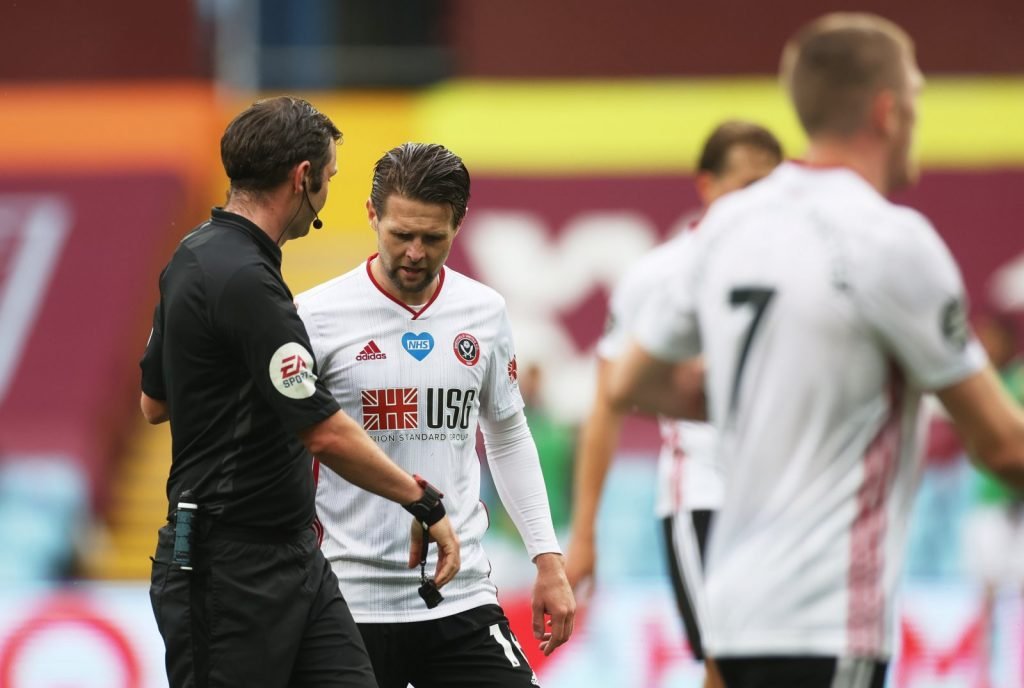 Sheffield could not believe their goal was not spotted

On the June 17th 2020, Premier League football returned for the first time in three months due to the coronavirus pandemic halting all sport in the country.

In what proved to be a vital match in the relegation dogfight, Aston Villa hosted surprise package Sheffield United at Villa Park.

Victory was an absolute must and Villa players and fans alike were devastated when goalkeeper Orjan Nyland flapped at Oliver Norwood’s free-kick and bundled it into the goal.

It appeared to be very far over the goal line and The Blades were waiting for goal line technology to confirm what they already knew.

However, the confirmation never came, and bewildered referee Michael Oliver had no choice but to wave play on.

The game went on to finish 0-0, a ‘technical error’ on goal line technology’s part was confirmed and Dean Smith’s side managed to stay in the Premier League by one point. 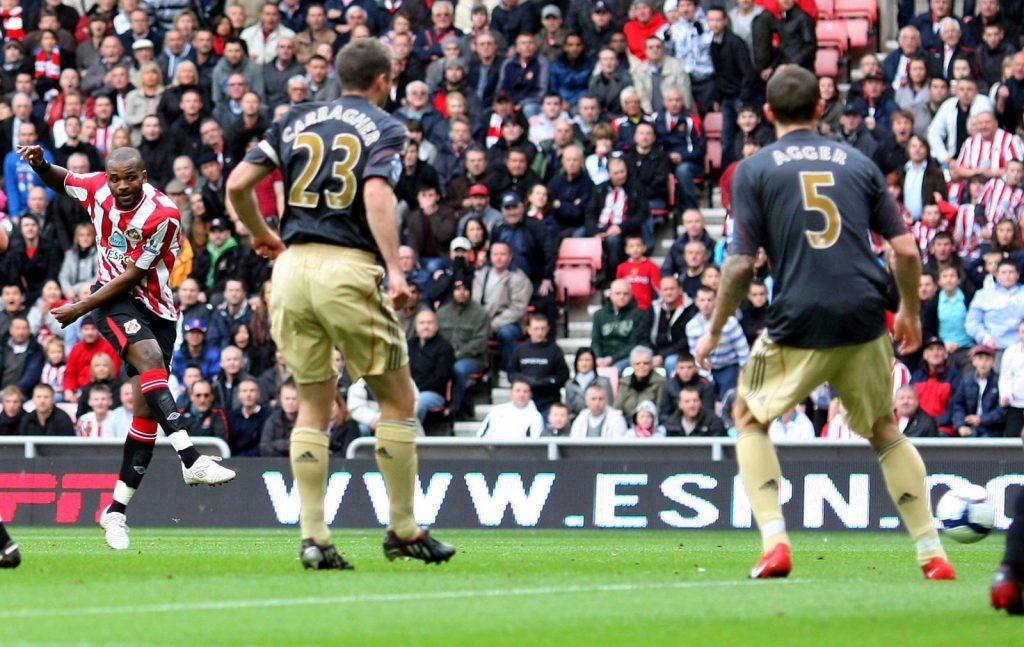 Bent’s strike was the only goal of the game.

Darren Bent is now a popular pundit and commentator on beloved sports radio station talkSPORT, but the former England striker is perhaps most known for scoring one of the most controversial goals in Premier League history.

In an extraordinary contest at The Stadium of Light, Bent tested then Liverpool goalkeeper Pepe Reina with a firm low drive from 18 yards.

However, on its way to goal, the ball ricocheted off an inflatable beach ball thrown onto the pitch by a Liverpool fan, flying past a completely bamboozled Reina.

After a brief few seconds of confusion as to whether the goal was allowed, referee Mike Jones allowed it to the delight of the 40,000 Sunderland fans in the crowd. 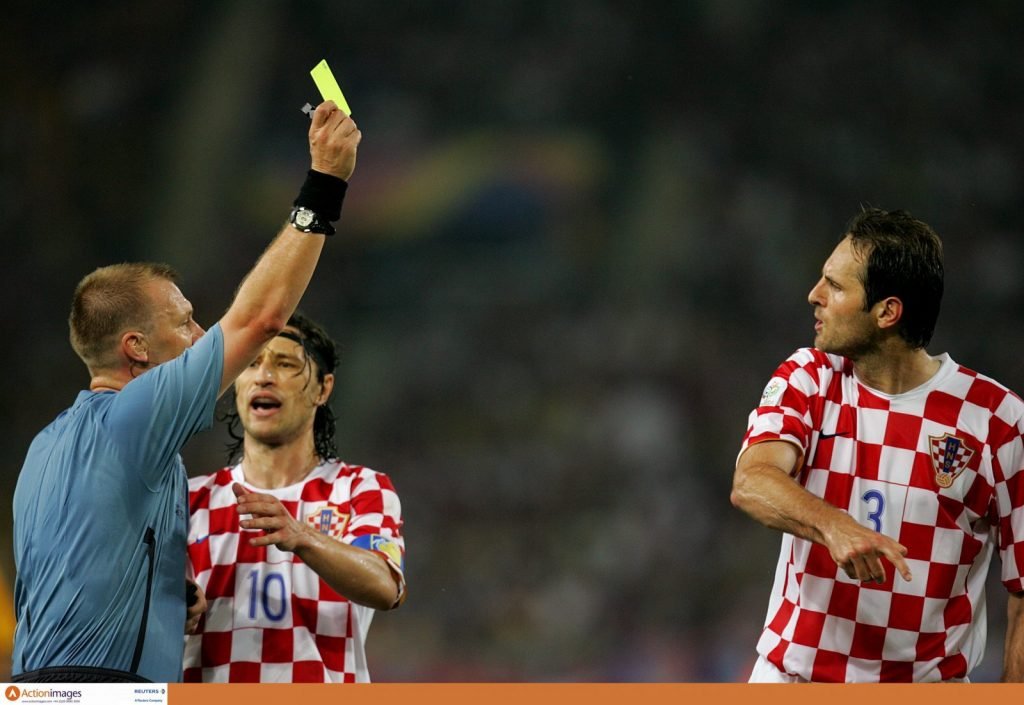 Graham Poll was one of the finest referees Britain had to offer and his high standard of refereeing was expected to earn him the opportunity to officiate the 2006 World Cup final.

However, a sudden brain freeze in the crucial Group F contest between Croatia and Australia dashed these hopes as his World Cup ended in embarrassment.

In what was a niggly affair – Croatia’s Josip Simunic was booked very early on with a professional foul.

Simunic did not learn his lesson and conceded another cynical challenge very soon after, gaining a second booking.

Amazingly the red card did not follow and Simunic carried on even though he should have been sent off.

Even more incredibly, the Croatian defender still did not learn his lesson and booked again for the THIRD time.

Poll’s memory did eventually rejig, and he did remember to send Simunic off at the second time of asking.

Nevertheless, the writing was already on the wall for Poll who was sent home from the tournament soon after the match.