Atletico Madrid forward Antoine Griezmann has targeted a move away from the club this summer, with Manchester United topping the list of potential suitors, Sport have reported.

The France international, a World Cup winner in Russia last July, chose to remain in Spain’s capital which he revealed in his own documentary.

But just nine months later, Griezmann is looking for a route out of Atletico and now regrets turning down Barcelona to stay at the Wanda Metropolitano.

It has been a frustrating campaign for the 27-year-old and Diego Simeone’s men, who are 10 points behind leaders Barcelona, as well as being knocked out of the Champions League by Juventus over two-legs. 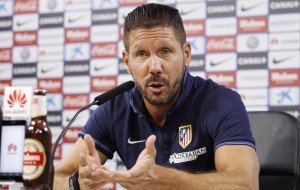 And United are now front runners to land the wantaway Griezmann, who has scored 12 league goals this term, and hope international team-mates Paul Pogba and Anthony Martial can convince him to sign on at Old Trafford.

Griezmann penned a new contract with La Rojiblancos until 2023 after rejecting a switch the the Nou Camp, with a release clause of £171m.

However, that figure will drop to £103m as of July 1, which has alerted the Red Devils to his potential availability.