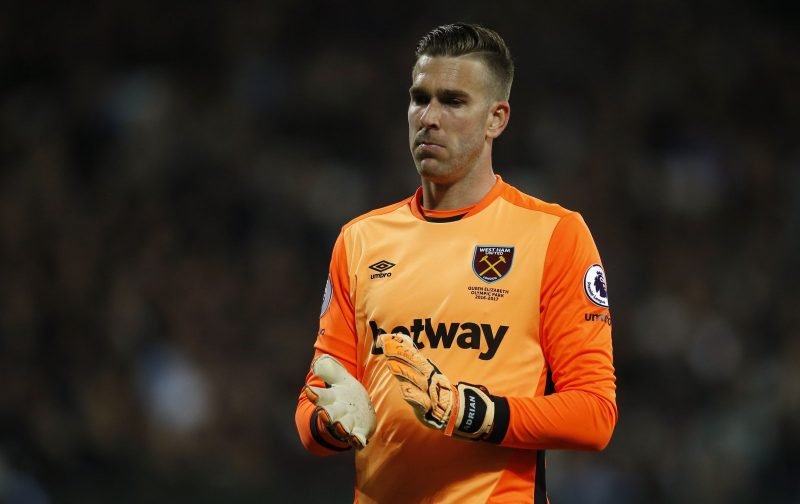 Goalkeeper Adrian will be staying at London Stadium for at least the next two seasons after the club triggered an extension to his contract according to the latest reports.

Adrian joined the Hammers in 2013 after impressing then boss Sam Allardyce and goalkeeping coach Martyn Margetson while he was at Betis in his native Spain.

Since making the move to West Ham Adrian has made over 100 appearances from the club and become Bilic’s number one choice until a mistake against Stoke City moved Darren Randolph ahead of him in the pecking order.

The Spanish international has recently regained his place as West Ham’s number one and after keeping two successive clean sheets – including one against old nemesis Stoke – appeared to have cemented his place in the team.

Last week’s 4-0 hammering at the hands of Liverpool won’t have done his cause any favours but it at least seems for now with the contract offer he has the backing of his manager.

West Ham fans have been reacting on social media to Adrian’s new deal:

Slaven Bilic: We have activated an option to keep Adrian for another two years. #whufc pic.twitter.com/XEt5zuvGkR

@WestHamUtdStats @PW57WHU Hey Philip good afternoon how are you? What’s up? Great news about Adrian has signed a new 2 year deal until 2019 our no.1 keeper

@MichaelAGomes5 @WestHamUtdStats Hi Michael, Yes I’m also well pleased we have tied Adrian down and recently he has shown why he is our No 1 Keeper….

#Adrian news is great for #whufc