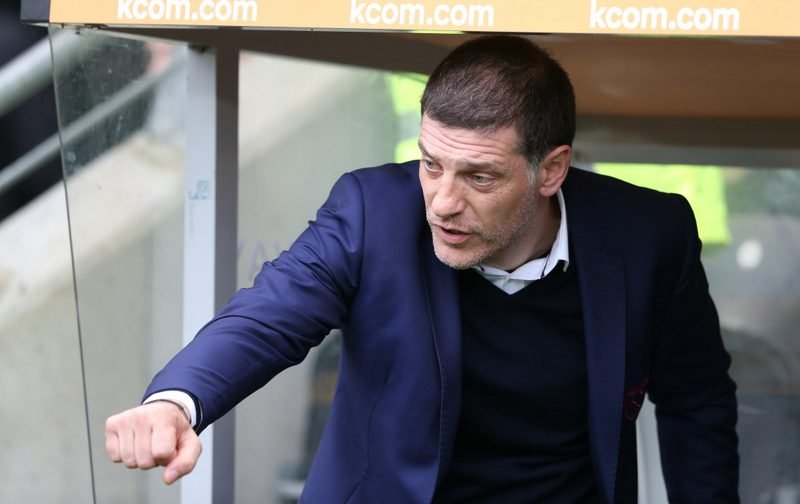 West Ham drew for a third successive time in the Premier League last weekend courtesy of a goalless draw at Stoke.

Slaven Bilic’s men had chances to record what would have been their 11th league win of the campaign at the bet365 Stadium on Saturday, yet Potters goalkeeper Jack Butland, making just his second league start of the season following injury, performed well to deny Manuel Lanzini and Andre Ayew.

And the result meant that the Hammers moved a step closer to safety, with Bilic’s men remaining seven points clear of the drop with just three games of the season remaining.

Yet, despite all but sealing their place in the top-flight next term, reports suggest that the Croat is fighting for his job at the London Stadium, with it reported that the 48-year-old will need to oversee two good performances against first Tottenham on Friday night and then Liverpool the following weekend to strengthen his case to remain in charge next term.

And those recent reports have stimulated a mixed reaction from Hammers supporters on Twitter, with some supportive of their boss, while others wouldn’t be surprised to see him lose his job this summer…

As if by magic, typical West Ham fashion, we have another “Bilic has two games to save his job” story. Never easy for him. #COYI #SuperSlav

@penners78 @LukeyMalden @davidgold I’m a massive Bilic fan… however signings were awful and some of his decision making has been awful. Subs at the weekend were just bizarre

Wouldn’t be surprised if Bilic got sacked

What has Bilic actually done this season to warrant a contract extension, if it wasn’t for a few dodgy/ lucky 1-0 wins we’d be relegated