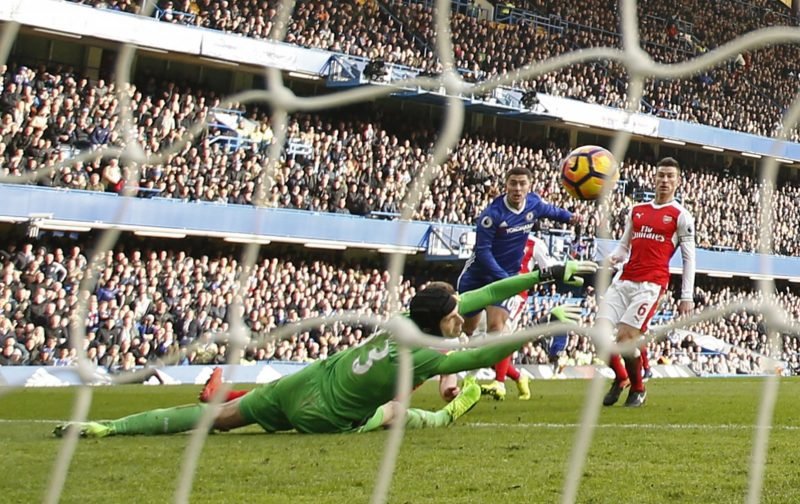 Chelsea strengthened their grip on the Premier League title race after a commanding 3-1 victory over Arsenal at Stamford Bridge on Saturday.

Goals from Marcos Alonso, Eden Hazard, and Cesc Fabregas secured a 19th win of the campaign for Antonio Conte’s men, with Olivier Giroud’s late header the only blot on an otherwise sensational afternoon for the Blues.

They remain nine points clear at the top after Tottenham narrowly beat Middlesbrough 1-0 at White Hart Lane,  with Harry Kane netting the winner, while Manchester City moved up to third courtesy of a 2-1 win over relegation-threatened Swansea at the Etihad Stadium.

Pep Guardiola’s side leapfrogged both Arsenal and Liverpool, as the latter suffered a second defeat in three game by going down 2-0 at Hull, which leaves the Tigers just a point adrift of safety after back-to-back home league victories.

Elsewhere, Manchester United moved to within two points of the top four after comfortably beating champions Leicester 3-0, with the Foxes now just a point clear of danger, while Everton remain in seventh after a thrilling 6-3 victory over Bournemouth at Goodison Park.

West Brom stay eighth after beating Stoke 1-0 at the Hawthorns, West Ham move up to ninth after seeing off Southampton 3-1 at St Mary’s, and Watford round off the top ten after they got past Burnley 2-1 at Vicarage Road.

At the bottom, Sunderland produced a sensational performance to thump Crystal Palace 4-0 at Selhurst Park, a result which keeps David Moyes’ side bottom, but moves them to within two points of safety after a fifth win of the season.

So, in what was an exciting weekend of football in England’s top-flight, here is What’s Hot and What’s Not from the past few days of Premier League action…