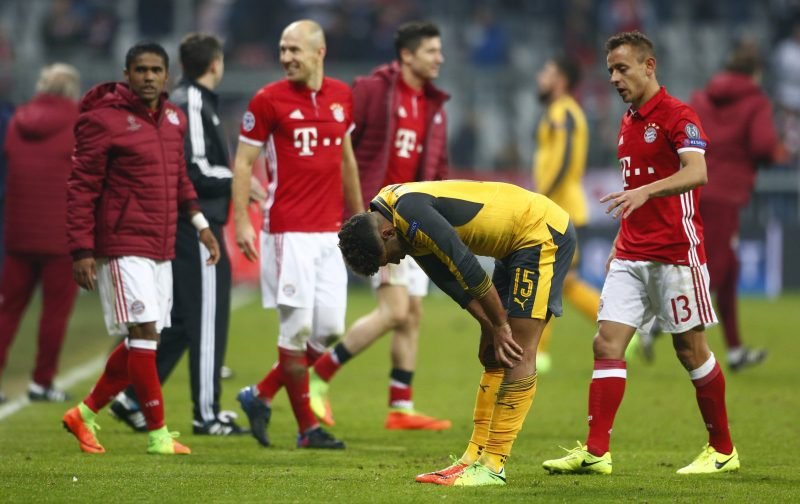 Manchester United picked up victory in the Europa League but it wasn’t a good week for the North London duo of Arsenal and Tottenham in their respective European outings.

Arsene Wenger’s Gunners were thumped 5-1 by German champions Bayern Munich in the first leg of their Champions League last 16 tie on Tuesday night, despite going in at half time level at 1-1 after Alexis Sanchez cancelled out Arjen Robben’s excellent opener for the hosts.

However, that was as good as it got for Wenger’s men, who totally capitulated second half and conceded three goals in ten minutes to all but end their hopes of ending their last 16 hoodoo, the stage at which they have been knocked out of the competition in each of the last six seasons.

Arsenal weren’t the only team battered in the Champions League this week, as Luis Enrique’s Barcelona went down 4-0 at French champions Paris Saint-Germain, who of course finished runners-up to Arsenal in the group stages.

In the Europa League on Thursday, Jose Mourinho’s Manchester United eased past Saint-Etienne 3-0 at Old Trafford thanks to a hat-trick from in-form striker Zlatan Ibrahimovic, yet Tottenham suffered a surprising and disappointing 1-0 defeat in Gent, leaving them with a lot of work to do at Wembley next week.

So, in what was an exciting week of football around the continent, here is What’s Hot and What’s Not from this week’s European fixtures…