Where are they now? Former Manchester United midfielder Park Ji-Sung 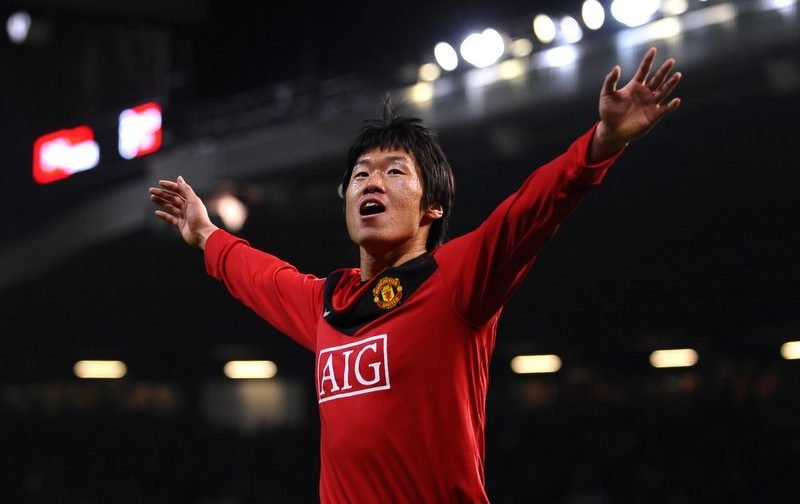 Shoot! would like to wish Park Ji-Sung many happy returns as the former Manchester United midfielder celebrates his 37th birthday today!

The former South Korea international, who proudly made 100 appearances for his country between 2000 and 2011, endeared himself to Red Devils fans during his spell at Old Trafford.

Park, who began his career at Japanese outfit Kyoto Sanga FC, first made his name in European football with PSV Eindhoven after arriving in the Netherlands back in 2003.

Come July 2005, the midfielder became only the second ever East Asian player to feature for Premier League giants Manchester United after agreeing a bargain £4m transfer to Sir Alex Ferguson’s side. 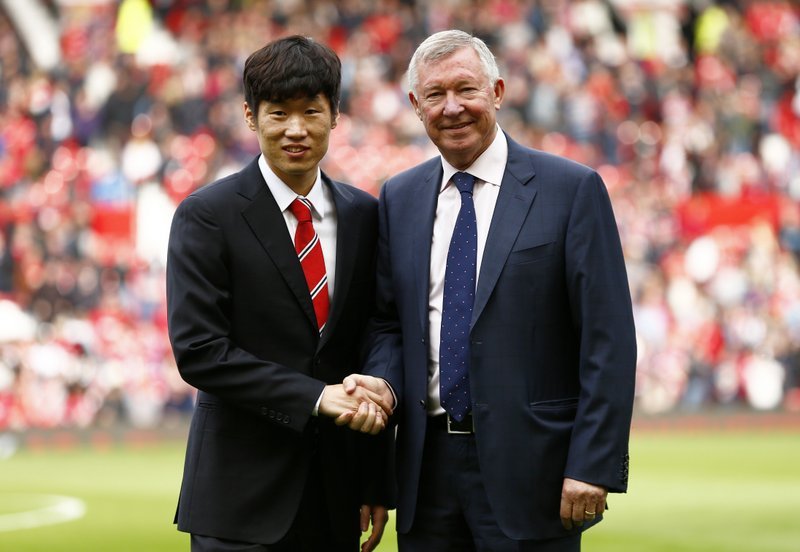 Park went on to score 28 goals in over 200 games in all competitions for the Red Devils, and lifted four Premier League titles, three League Cups, the UEFA Champions League, the FIFA Club World Cup and four FA Community Shields during his seven-year stay at The Theatre of Dreams.

But after leaving Old Trafford back in the summer of 2012, Shoot! asks, where is Park Ji-Sung now?

The versatile midfielder, who could operate on either wing, as a defensive enforcer or an attacking midfielder, linked up with manager Guus Hiddink at Eredivisie side PSV back in 2003, where he won two league titles (2002-03, 2004-05) and two cups (KNVB Cup and the Johan Cruyff Shield), netting 18 goals in 116 outings overall.

The South Korean initially struggled in Holland, but the departure of Arjen Robben to Chelsea in the summer of 2004 allowed Park to showcase his true ability, which eventually led to his lucrative Premier League switch a year later.

He scored 10 goals and registered six assists for PSV during the 2004-05 season, where the Dutch outfit reached the semi-finals of the Champions League.

His sparkling form was rewarded with a nomination for the 2005 UEFA Best Forward award, alongside the likes of Ronaldinho, Andriy Shevchenko, Samuel Eto’o and Adriano. This is when Sir Alex swooped.

He made more history soon after his arrival, becoming the first ever Asian player to captain the Premier League club in October 2005 after taking the armband from fellow midfielder Ryan Giggs against Lille in the Champions League, before scoring his first United goal against Birmingham City in December 2005. 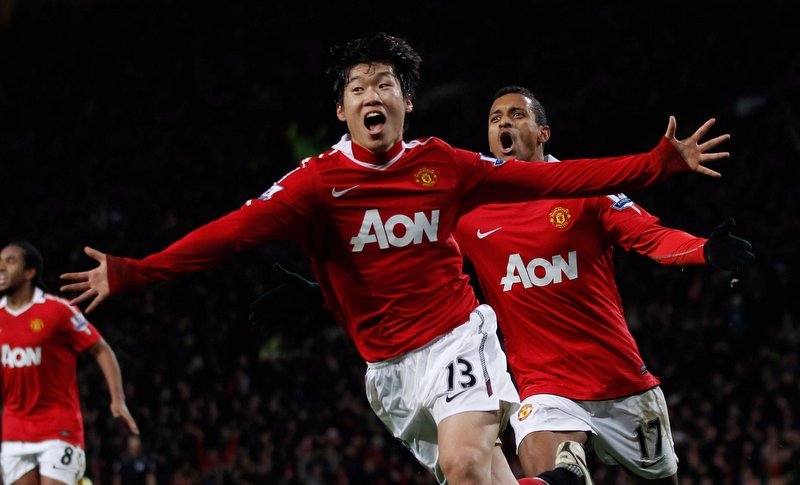 By the end of the 2006-07 campaign, Park became the first South Korean player to win the Premier League, as United finished six points clear of runners-up Chelsea.

Sir Alex’s side reached the Champions League final in 2008, facing Premier League rivals Chelsea in Moscow, Russia, but unfortunately for Park, the midfielder was excluded from the matchday squad, as he watched his team mates fend off The Blues on penalties (1-1 AET).

The legendary manager later admitted it was one of the hardest calls he made during his entire career, and was perhaps a regret.

A year later, Park verbally agreed a new contract worth around £75,000-a-week at Old Trafford, before just a few days later, netted his first Champions League goal for United against rivals Arsenal inside the Emirates Stadium to help the Red Devils reach a second successive European Cup final.

Park did feature against FC Barcelona in Rome, becoming the first Asian player in history to feature in the final of the tournament, but unfortunately goals from Eto’o and Lionel Messi saw the La Liga giants seal victory.

In May 2010; Park loved the club so much, the South Korean vowed he would like to spend the rest of his career at Manchester United, though he made just 15 appearances in the Premier League the following campaign, with injuries taking its toll.

He did however still chip in with eight goals and seven assists, as Park went on to lift his fourth Premier League title – his final major honour with United.

Heading into his final season with the Red Devils, Park scored three goals in 28 appearances in all competitions, including the sixth strike during United’s 8-2 demolition of Arsenal at Old Trafford in the Premier League.

The former PSV star played his 200th United match against Chelsea in February 2012 – becoming the 92nd player to reach that milestone in the club’s history. 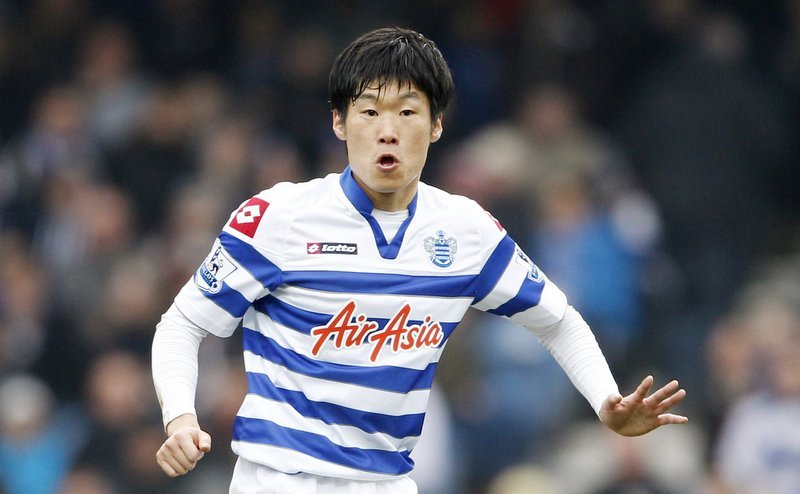 A few weeks later, Park proudly captained United for the first time from the beginning of a game during his side’s 2-1 defeat to Ajax in the UEFA Europa League.

Come the end of the 2011-12 campaign, Park made the difficult decision to leave The Theatre of Dreams due to a lack of first-team opportunities, before signing a two-year deal at Queens Park Rangers.

He will be fondly remembered as a club hero at Old Trafford, however, as supporters loved his sheer determination and love for the game and the club.

His remarkable fitness levels usually saw Park run rings around others in the midfield, with his slick passing and willingness off the ball endearing himself to the thousands inside The Theatre of Dreams.

Initially appointed club captain at Loftus Road, his spell in the capital city was largely disappointing as injuries and a lack of form started to taint his career in English football, before worse was to follow as QPR suffered relegation from the Premier League that term.

After failing to score in 25 games for the club, the Championship outfit agreed to loan Park to former side PSV during the 2013-14 season, where he found the back of the net twice in 27 games overall.

But come May 2014, the South Korean hero announced he would be retiring from the sport, mainly due to injury, upon the expiry of his QPR contract that summer.

But since hanging up his boots, Park has proved a huge success off the pitch, too. 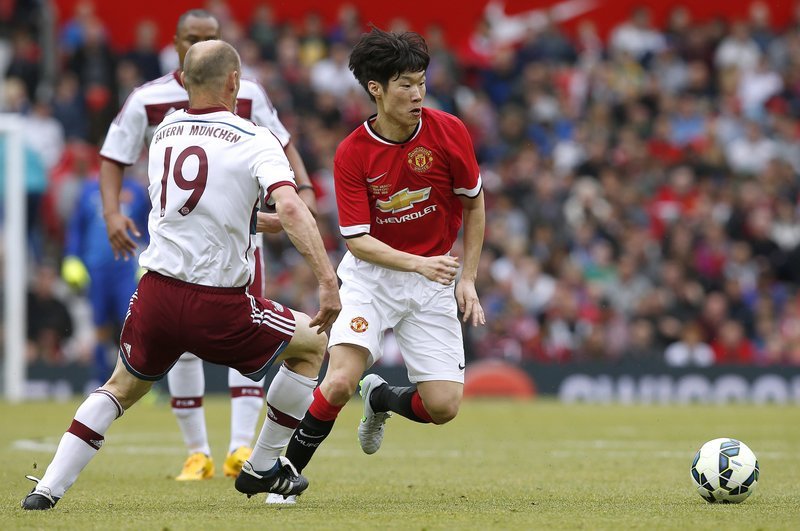 Park in action for Manchester United Legends versus the Bayern Munich All Stars in June 2015.

Having become the founder of the charitable foundation, JS Foundation, a few years earlier; Park revealed to the media about his upcoming marriage to Kim Min-ji during his retirement announcement, and then welcomed the birth of his daughter back in November 2015.

In October 2014, he was appointed as a global ambassador for Manchester United, being presented to the crowd by manager Sir Alex Ferguson during the team’s home fixture against Everton.

Park is the first Asian to become an ambassador of the Premier League giants, and joins the legendary likes of Sir Bobby Charlton, Denis Law, Bryan Robson, Andy Cole and Sir Alex himself in the role.

And perhaps more surprisingly than all of that, the former United hero graduated in July 2017 after studying for an international masters degree in management, law, and humanities of sport at De Montfort University, Leicester.