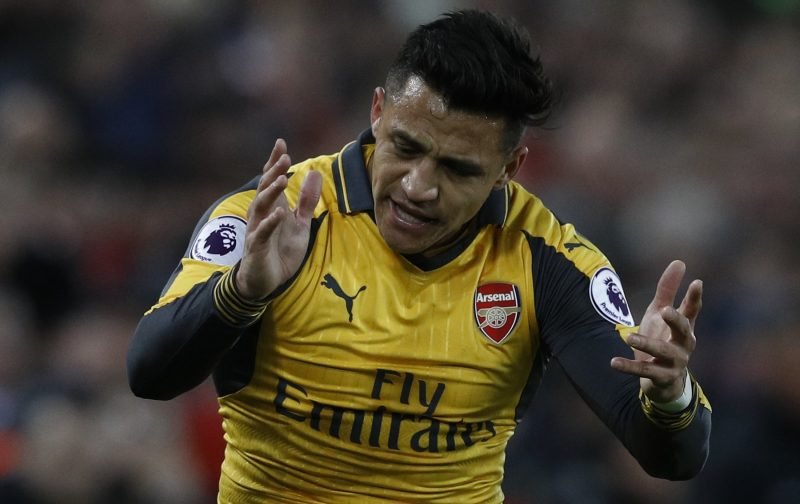 Alexis Sanchez was dropped from the Arsenal side for their trip to Liverpool on Saturday, with manager Arsene Wenger citing a tactical switch as the reason for taking his top-scorer out of the side.

However, it has emerged that the Chilean international was actually dropped because of a training ground bust-up last week, in which several Arsenal teammates reportedly confronted the 28-year-old as they returned to the changing rooms.

With Sanchez’s future at the Emirates unclear anyway, given that he has yet to agree a new deal with the North London outfit, this would hardly have helped the cause in trying to keep the 17-goal Premier League man at the club.

The attacker has scored 20 goals and laid on 12 assists in 35 games in all competitions this season, and it was he who made a difference when coming off the bench against the Reds on Saturday, although his assist for Danny Welbeck turned out to be too little too late for the Gunners, who were already 2-0 down at the break.

Although Sanchez and manager Wenger were seen shaking hands this morning ahead of training, speculation has arisen about the 28-year-old’s future at Arsenal, with many expecting him to leave this summer.

Thus, the Gunners will have to turn their attentions to finding someone who can replace the goals, assists, and overall attacking qualities that Sanchez brings, so here are THREE players who could be potential replacements for the Chilean…