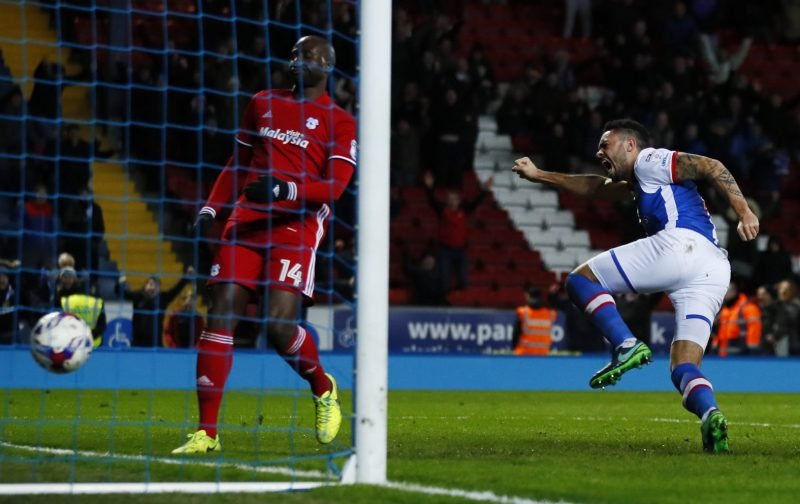 Left-back Williams bundled home in stoppage-time to preserve a point for the hosts, who had previously gone behind to Kenneth Zohore’s volley seven minutes before the interval.

Rovers enjoyed early chances during the first half, with Charlie Mulgrew’s swinging free-kick turned aside by Allan McGregor, before Sam Gallagher swivelled to crash a volley against the crossbar.

Cardiff, who had efficiently dealt with the early pressure, came into the contest more, and Greg Halford glanced a header straight at Jason Steele. Zohore also looped a header off the top of the bar.

Neil Warnock’s team did take the lead after 38 minutes though on a cold night in East Lancashire courtesy of Zohore, who connected with Junior Hoilett’s cross from the right to thump beyond Steele into the roof of the net.

In the second half, Cardiff had to deal with a Blackburn onslaught.

Firstly, Ryan Nyambe stood up a cross which was met by Liam Feeney’s downward header, only for Jazz Richards to clear off the line.

In the closing stages, Blackburn threw everything at the South Wales outfit, and they were finally rewarded in the 90th minute when Williams controlled Connor Mahoney’s punt from the right to steer through a sea of players, and indeed goalkeeper McGregor.

Blackburn are 20th in the second tier, two points and two places above the relegation places with a trip to Norwich City awaiting them on Saturday, while Warnock’s Cardiff sit 13th ahead of their home clash with Birmingham City at the weekend.

So, here are THREE things we learned from Blackburn’s draw with Cardiff at Ewood Park…