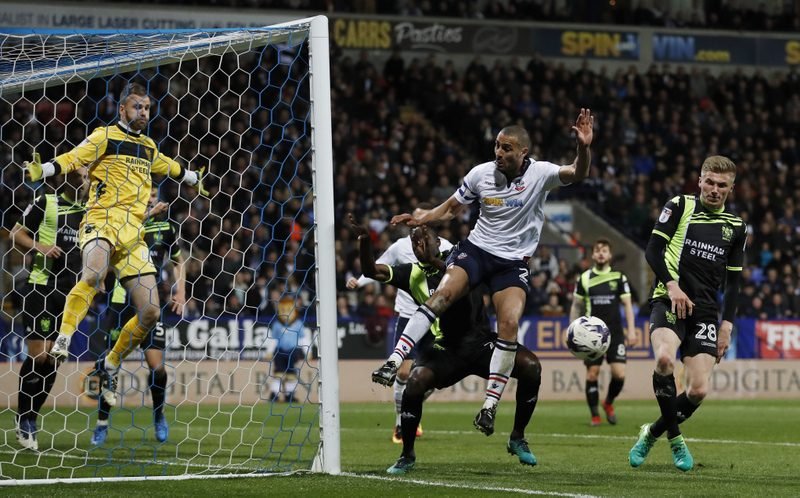 League One promotion-hopefuls Bolton Wanderers squandered the chance to move four points clear of third-placed Fleetwood Town, after they were held to a goalless draw by relegation-threatened Bury in a Greater Manchester derby at the Macron Stadium on Tuesday night.

In a tense encounter which had implications at either end of the third-tier standings, the points were shared, despite Phil Parkinson’s Bolton side dominating play towards the conclusion.

The opening stages of the tightly-contested game offered up little in terms of clear-cut chances, as both sides looked to gain an ascendancy on a mild spring evening.

Dorian Dervite and Adam Le Fondre were presented with efforts on goal for Bolton, but any in-roads that Parkinson’s men attempted to make were thwarted by a regimented Bury outfit, in what was a fiery, highly-tempered start.

With the Shakers sitting deep, frustrating their local rivals in the process, Bolton went close in the closing minutes of the half when Filipe Morais’ teasing low cross from the right found its way to left-back Andrew Taylor, who skewed a tame, trickling shot wide.

As the two teams emerged for the start of the second-half, it was Lee Clark’s visiting Bury who immediately threatened, with James Vaughan connecting with Taylor Moore’s cross from the right to force goalkeeper Mark Howard into tipping the ball out for a corner.

Up the other end, against a backdrop of boos from the frustrated home faithful, Bolton pushed for an opener which they craved, though they were once again limited to half-chances, the most significant of which came through Morais’ daisy-cutting snapshot, which was straight into the grasp of ‘keeper Joe Murphy.

In the final 20 minutes of play, Bolton ramped up the pressure. David Wheater went close with a rasping drive from 30-yards, which was clawed to safety by Murphy, before Le Fondre was denied when his spectacular shot from the edge of the area crashed off the underside of the crossbar onto the line and away to safety.

Mark Beevers later glanced over Morais’ floated corner, with Bolton firmly turning the screw in the dying embers, against their struggling neighbours from Gigg Lane.

Having come under a substantial, ever increasing bombardment from Bolton, Bury held on resiliently to gain an invaluable point, though it is a case of what could have been for second-placed Wanderers, who are winless in three, in their promotion pursuit.

The result means Bolton edge two points clear of Fleetwood Town in the race for automatic promotion, while Bury, who are 21st in the division, are two points ahead of the bottom four relegation positions.