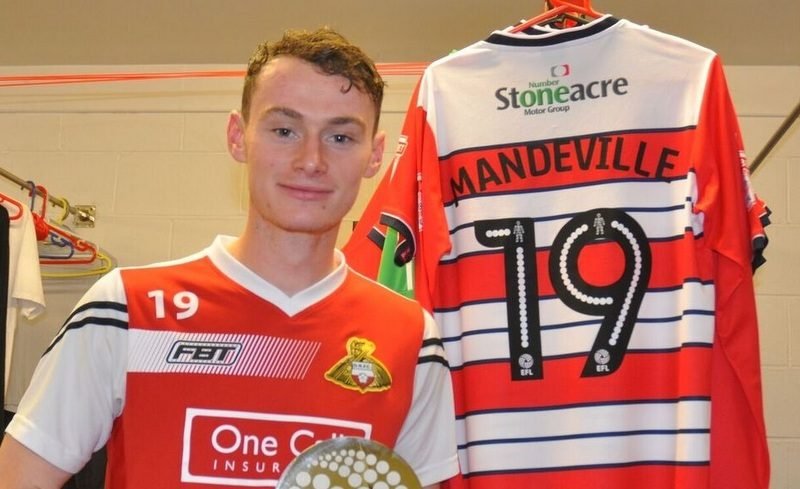 Having already showcased the talents of Tottenham teen talent Joe Muscatt, today we turn our attentions to fellow youngster Liam Mandeville, who is on the books of League Two outfit Doncaster Rovers.

From Sunday League to the Football League, the Donny youngster has already achieved a remarkable rise through the professional football ranks.

However, his recent Young Player of the Month award is destined to set the teen up for further stardom, attracting interest from higher league clubs, as Mandeville enjoys a a rich vein of form,  having netted six goals in his last seven league outings.

The Lincoln-born centre forward joined Darren Ferguson’s side at the age of 16, having starred for non-league Leven FC, before putting pen to paper on a professional contract just a year later at the Keepmoat Stadium.

He made his first-team debut in Donny’s 3-0 defeat to Bradford City on April 3, 2015, replacing fellow forward Jonson Clarke-Harris for the remaining six minutes.

Further substitute cameos followed during draws against Rochdale and Fleetwood Town during the 2014-15 season, but it wasn’t until February 2, 2016, that Mandeville scored his first senior goal in professional football, despite it being a consolation in Doncaster’s 2-1 loss to Walsall.

More despair followed for all involved at the Keepmoat back in May, as Doncaster were relegated to League Two. However, Ferguson’s men have equipped themselves expertly in the bottom-tier, currently sitting top of the pile, level on points with Plymouth Argyle, after defeating Notts County 1-0 on Boxing Day.

Mandeville played the full 90 minutes at Meadow Lane, and despite not notching in the match winner himself, has impressively scored nine goals and provided five assists in all competitions during his breakthrough campaign.

With the January transfer window just around the corner, reports suggest Doncaster are bracing themselves for offers for their talented teen. But with an instant return to League One on the cards, plus his flourishing development alongside experienced Football League striker Andy Williams in Yorkshire, why would Mandeville opt for anywhere else in the New Year?

The former Leven star’s standout performance of the 2016-17 term was away at Exeter City last month, a sensational display that kick started his remarkable goalscoring run.

The 19-year-old replaced Niall Mason on 69 minutes at St James Park, with Doncaster trailing 1-0. But, within just three minutes of his introduction, Mandeville headed the visitors level, before teeing up fellow forward John Marquis twice in the final 13 minutes to wrap up a remarkable comeback in Devon.