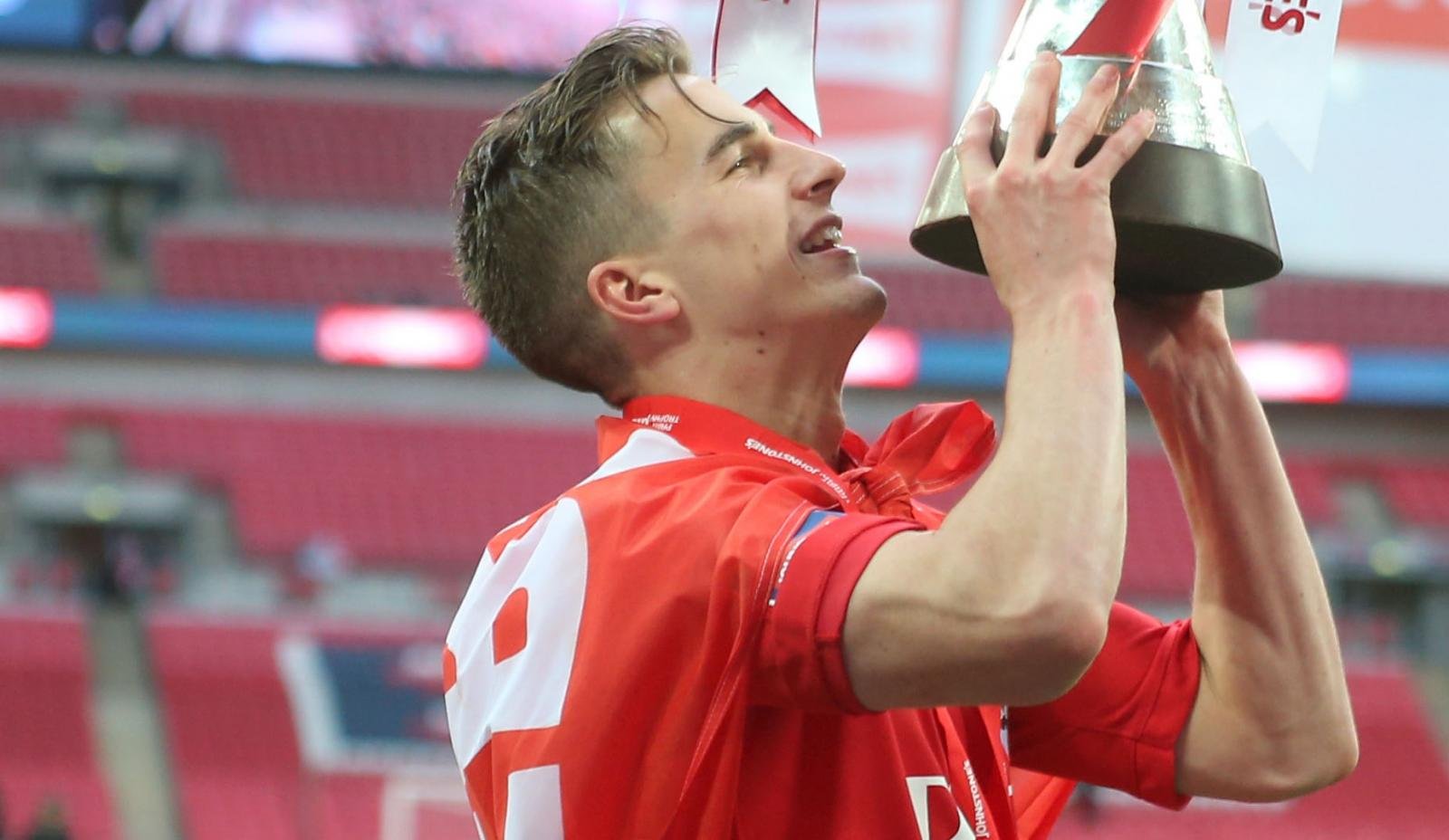 Bristol born and bred; local lad Joe Bryan is living his childhood dream of playing for his hometown club, but now the youngster is hungry for more honours following last season’s silverware success.

The 22-year-old, who arrived at Ashton Gate when he was just eight, won the League One title and Johnstone’s Paint Trophy under manager Steve Cotterill last term, a feat that he hopes will serve as a sign of things to come throughout his promising career.

Bryan, who won the Football League’s Young Player of the Month award back in February, has become an ever-present star in the Robins’ comeback campaign in the Championship following the club’s two-year absence from the second-tier.

The wing-back’s rise to stardom comes at a very exciting time for the club; with City once again just one step away from the Premier League and the Robins’ stadium capacity being boosted to 27,000 to reflect the ambition on the pitch.

After scoring the only goal of the game against promotion favourites Middlesbrough back in August, Bryan is also looking to improve upon last year’s personal tally in front of goal in a bid to keep the Reds afloat at the end of the season.

Bryan spoke exclusively to Shoot about his career at Ashton Gate, last term’s trophy filled campaign, enjoying life back in the Championship and what it feels like to score against City’s arch-rivals, Bristol Rovers.

Born in Bristol; you came through the youth academy here at Ashton Gate. How long have you been at Bristol City and what do you love about the club?

Last season; Bristol City ran away with the League One title, accumulating 99 points, lifting their second piece of silverware of the season following the Johnstone’s Paint Trophy success. Can you sum up last year’s promotion winning campaign?

“Hard work! Yeah, it was a long slog. Ultimately, in the end; winning both trophies, it was great. Especially at such an early stage of my career, to taste that sort of success, it drives you on to have it again.”

After a two-year absence from the second tier of English football, what is the club’s aim for the 2015-16 season?

“Aim high! We just want to win every game that we play. We don’t look for end goals yet, we are still only six to eight games into the season. We just look to play well every week.”

You scored an impressive seven goals in 50 appearances in all competitions last season for City. Are you aiming for the same again this season?

“I want to improve upon what I did last season. I think I got 13 assists and seven goals; so I want more than that this year. But definitely more goals!”

Is that an aspect of your game that you work on in training?

“Definitely. I stay behind and do some shooting practice with the goalkeepers. But nothing can really prepare you for games, training only prepares you so much. You have got to get the chances in games to score.”

It has been a tricky start this season. What are the main differences you’ve noticed already in the Championship compared to League One?

“In League One you can get away with a few mistakes and you won’t get punished. In the Championship; if you make a mistake, you get punished. I think we have tasted that already. But we have been playing well. It sounds frustrating for the fans because we have been playing well, but we are just not getting the results. We have put in good performances but I think all of us have been a little bit naive at times and that has cost us.”

Do you think the level up has taking you a bit by surprise after winning the league in style last season?

“Well last season we were very used to winning. So to come into a new league with a lot of ex-Premier League clubs; I think we have been guilty, me as well, of sometimes thinking, ‘Oh, look who we are playing!’ A big club and big players, rather than thinking, ‘I don’t care who I am playing against. I don’t care what club or player I am up against, I am just going to go for it and show everyone how good I am’.”

One of the summer signings, Jonathan Kodjia, has adapted well to life in England. How impressed have you been by him?

“Yeah, he is playing really well. I think it has been very hard for him as he doesn’t know much English, but he has done really well and he is showing everyone how good he is and why Bristol City were interested in him.”

Manager Steve Cotterill endured a fantastic first full season in charge at Ashton Gate last term, lifting the League One title and Johnstone’s Paint Trophy. What have you made of his impact at the club?

“It has been massive! It is the first time in a few years that the club has enjoyed success like this and for me personally, it has been massive as well. Last season was the first season that I played regularly and it gave me all the confidence in the world to go out there and show everyone that I do belong playing football and that I can play.”

As well as Cotterill; the chairman, Steve Lansdown, is a very ambitious guy. Being a local lad, can you sum up what he’s doing for the club?

“It is massive. He obviously loves the club and loves sport. I think the backing that he has given the club over the last however many years just shows how much he loves Bristol City and football.”

Lansdown is the man behind the major reconstruction of Ashton Gate, worth £45m, increasing the capacity from 13,400 to 27,000. Does the club’s visionary work off the pitch echo the club’s ambitions on the field?

“Yeah. I mean any player looking at Bristol City; if they are interested in them, will be thinking, ‘Wow, look at this club. It is moving forward. They have got a new stadium. They are playing good, attractive football’. That only helps the team on the field.”

During your time with the Robins, you have also enjoyed loan spells at non-league Bath City and League Two outfit Plymouth Argyle. Do you feel those experiences helped developed you as the player you are today?

“Always. I think especially when you are so young; I think I went out [on loan] when I was 17 or 18, the best thing then is to know what men’s football is like. The standard is just sort of whack it up and it is very physical. But you learn little things and you learn that it is a slog and that it is hard graft. It sounds really bad but it kind of gives you a wake-up call and you think, ‘I don’t want to be playing in the Conference for my whole career. I want to play as high up as I can’.”

You scored the winner during the club’s last meeting with arch-rivals Bristol Rovers back in September 2013 – a 2-1 victory in the Johnstone’s Paint Trophy. What can you remember from that game? Just how big is this Bristol rivalry?

“I can’t really remember it to be fair! It was about two years ago now. But at the time, it was lovely. I had a lot of people saying ‘well done’ and stuff. But it was so long ago now, it has kind of gone from my memory. Yeah, it is big [the rivalry]. This basically sums it up; in the summer I did a presentation for a local team and half of them were [Bristol] Rovers and the other half were City. And there was just a big divide down the middle; a set of tables for City players and another set of tables for Rovers players. They wouldn’t mix at all. They play football together, but they wouldn’t sit together!”