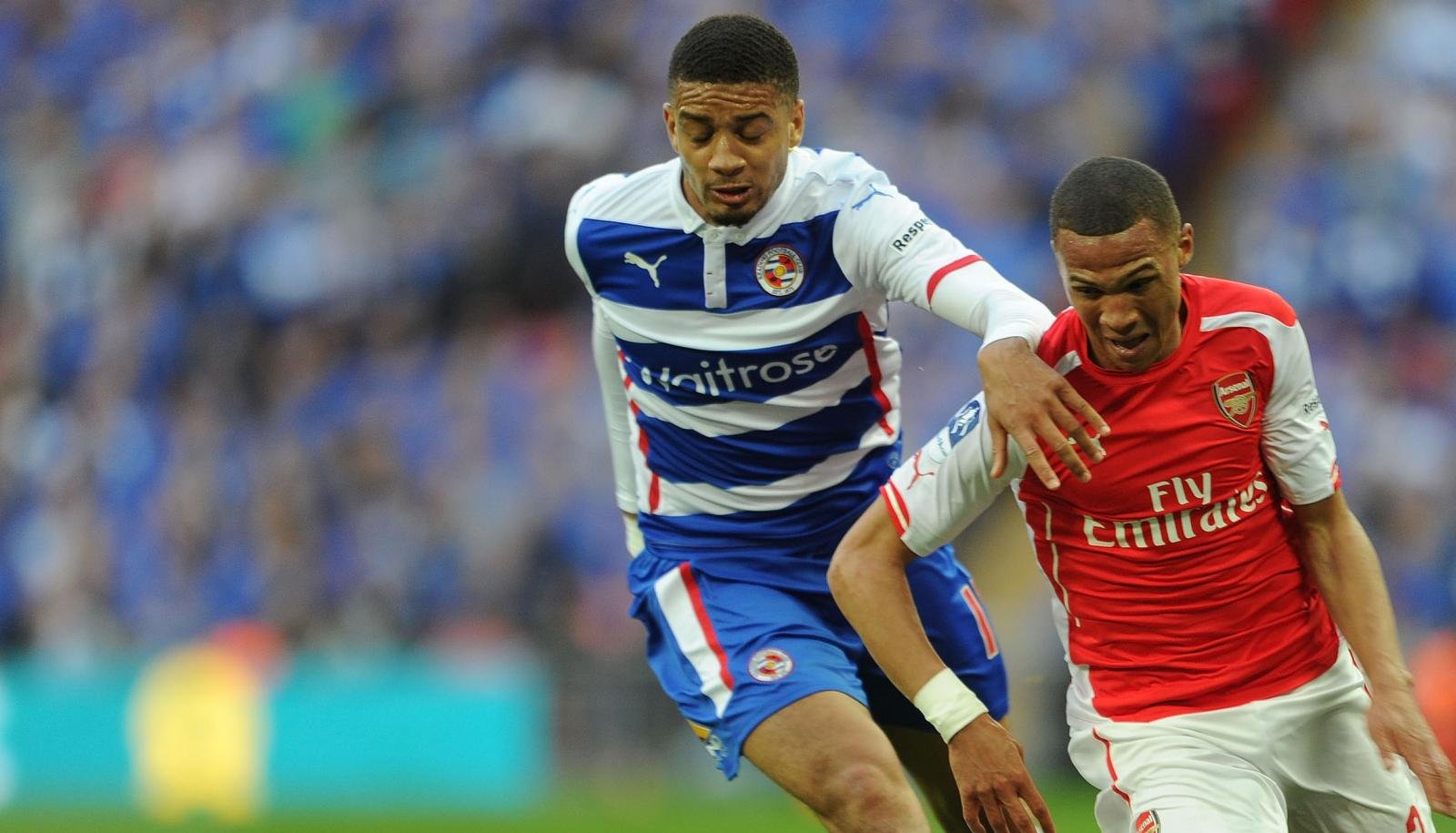 Despite being just 22 years of age, Reading centre-back Michael Hector has already had a fascinating career.

After several loan spells away from the club, he has now established himself as a first-team starter for the Royals, and recently signed a new three-year deal at the Madejski.

If that wasn’t enough, the Jamaica international also came up against, arguably, the best player in the world during this summer’s Copa America.

Shoot’s James Beavis caught up with the tall defender about the aims for the Championship outfit and how he dealt with coming up against Lionel Messi.

You’ve just signed a new three-year deal. Why did you decide that Reading is the right club for you to continue at?
“Reading gave me my opportunity when I was 17 and at college, they’ve been there for me and it just felt right for me to sign. Once I knew they wanted to it was a no-brainer and that’s I wanted to sign the contract.”

You scored on the final day of the season, as the team won 3-0 at Derby. Is that a result you can use for momentum going into next season?

“Yeah definitely. We’ve lost a few players from that game but we’re back in training now and hopefully we can build on that result. Derby are a very good side and were unlucky to miss out on automatic promotion let alone the play-offs last season!”

What do you think the aims are for Reading next season?

“I think we have to aim for the play-offs minimum. We want to push up the league. We’ve got a few good young players coming through and hopefully they will step up and get the first-team experience they need to perform on a regular basis.”

What are your personal aims for next season?

“I want to keep my shirt and play week in, week out like I did last year. I also want to be more consistent and keep on top form throughout the season.”

You made 49 appearances in all competitions last season. How good is it to play that regularly at the age of 22?

“It was good. It’s the first season I’ve had at one club and that helped improve my consistency throughout the year, allowing me to finish the season well with some good performances.”

“It’s a battle. You have games on a Saturday and Tuesday and if you do well in the cup, as we did last season, the fixtures build up and a lot of the training days become recovery sessions. It’s a league that I love learning my football in though, and it’s great that you can play these type of games. Every week there’s a different opponent and a different type of striker.”

Who was the best striker you faced last year?

“The two Bournemouth strikers, Yann Kermorgant and Callum Wilson. They had a very good partnership together but are very different players. They surprised a lot of people last season.”

Your centre-back partner Alex Pearce has left for Derby. How big a miss will he be for the club?

“He was a key member of the squad for many years and he captained the side towards the end of last season. He’ll be a big miss but football goes on and people change their views and what they want. We also have Anton Ferdinand to come in and he will bring a wealth of experience.”

Steve Clarke had some nice words for you when you signed the new deal. How good is it to have that confidence from your manager?

“He doesn’t say too much during the week, but when he does he says nice things. You know where you stand with him and since he’s come in he’s been a big influence on me in such a short space of time. What he said after I signed was a big positive and hopefully it continues.”

What’s are his best attributes?

“He’s very detailed in what he does. He’s also quite strict on the number of times you give the ball away because he wants us to keep the ball and overcomplicate things. The tactics he used against Arsenal in the FA Cup were brilliant and hopefully we will see those again next season, if he brings in all of the players he wants.”

How good was it playing at Wembley in the semi-finals of the FA Cup?

“It was a proud moment for me and also for my family and most of my friends to come and watch. It was on TV as well so a few of my teachers that had never seen me play got an opportunity to watch, which was a good feeling. It’s the home of English football. We were in the home changing room which was very good and it’s one of the best ones I’ve been in and hopefully we have many more similar days to come!”

What happened when you missed the team coach home afterwards?

“I went to get some food because there was some in the changing room so I’d dropped my bags on the coach and then come back. I was sitting down eating and a few of the other players were getting drug tested. I was talking to them and next thing you know the kit man has come in and told me that the coach had left. Obviously I thought he was just having a bit of banter but I walked out and the coach had gone so I had to get a lift home with the kit man!”

Looking back, you made your debut for the club as a substitute in a 7-1 win against Bolton. Was that a good game to make it in?

“There was no pressure at all! The manager told me to get warmed up and I wasn’t sure what was happening or where I was going to go. But he brought me on at centre-back ,which is a rare substitution, but it was good and I had a couple of runs and headers. It was a good moment for me and my family who were there as well.”

You’ve had a number of spells out on loan at non-league clubs and in the Football League. How have they aided your development?

“For my loan move in Ireland for example, I was 18 and living away from home. It’s helped me a lot. Obviously I’ve made a lot of mistakes on loan but I think those have helped make me a man. I’ve played a lot of games and it’s tough when you’re getting battered around, but I’m happy I did the loans and got that first-team experience to gain some consistency.”

Why did you choose to represent Jamaica?

“My family have said it from a young age. My dad was always wearing a Jamaica shirt rather than an England one and I told him that if I ever had the chance to play for Jamaica, I would. And that chance came this summer. It was a proud moment for me and my family.”

Do you remember watching them at the 1998 World Cup?

“I remember bits of it and the screaming when they scored because there is quite a big Jamaican community in East London where I grew up.”

You’ve just come back from the Copa America. How was it?

“It was surreal. I didn’t realise how big the competition was until I got out there, and obviously you’re playing against world-class teams that you watch at the World Cup. To be in their group was daunting at the start, and we lost all three games, but it was only 1-0 against some world-class players.”

As you said you lost every game, but all only 1-0. Against the likes of Uruguay and Argentina, how much confidence has that given the Jamaica squad?

“We had lots of positives to take from it into the Gold Cup and the upcoming World Cup qualifiers. Obviously Argentina and Paraguay, who were in our group, reached the semi-finals and there’s a lot of pride we can take that we held our own and that we had chances to actually cause upsets. I think people take Jamaica a bit more seriously now in a tournament and before they didn’t. Now we’re seen as a footballing nation rather than just an athletics one.“

And you played against Lionel Messi. How do you sum up that experience? How good was he?

“It was a great experience to play against him. I’m used to watching him on the television on Saturday and Sunday nights and to play against him was crazy. He just seemed to know where everyone was and when he had time to take a touch you could just feel that he knows he is that level above. I was proud that he didn’t score!”

And you’re in the squad to play in the Gold Cup. You have Costa Rica, El Salvador and Canada in the group. How do you see that panning out?

“Hopefully we can get through the group stages. Costa Rica did well in the World Cup but we ourselves are pushing to get quite far. But anything can happen and we’ll be taking it game by game and hopefully we can do well for the country.”

There are a number of other English-based players, as well as Garath McCleary in the squad. How helpful is that?

“There’s also Jobi McAnuff and Adrian Mariappa who I knew from Reading so that was a big help personally. They helped me get involved with the group and it is good that there are players in the squad that you know and you can talk to. To be fair the group of lads in the Jamaica squad are all very welcoming and there was a lot of banter flying around!”

Do you look up to players such as Wes Morgan?

“When you train with him you’re happy that he’s playing in the Premier League, but he gives you good advice and helps you in games and it’s good to learn off people that are playing at the highest level week in, week out.”

How did your switch from an attacking midfielder to a centre-back come about?

“It was in a trial game at college. We played Reading and our centre-back got injured so I had to move back and play there. The Reading director of football and the academy manager were there and they were impressed. I didn’t like heading the ball at first but I have to do it and I love it now!”

What are your future career ambitions?

“Trying to get Reading into the Premier League. That’s where everyone wants to be. I’d also love to play at a World Cup with Jamaica.”

Quick-Fire Round:
What are you listening to at the moment? Drake
What is your favourite film? Coach Carter
Caribbean food or English food? Caribbean food
Hobbies outside of football? Tennis and golf
3 dinner guests? Kevin Hart, David Beckham,and Michael Jordan