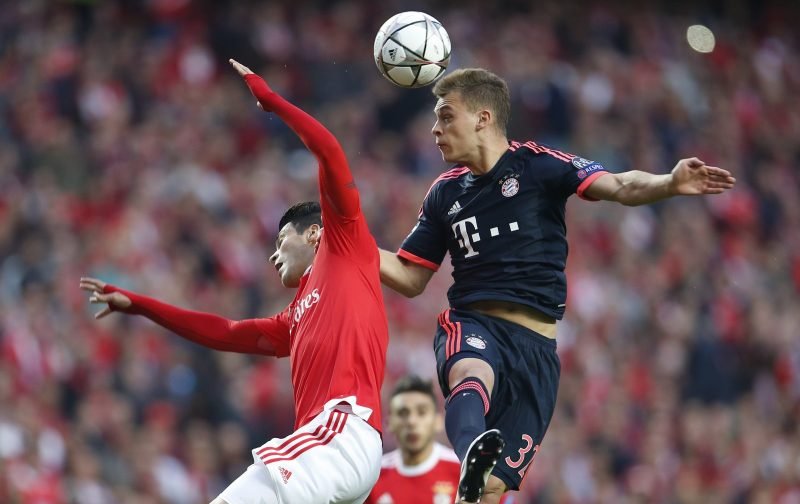 Manchester United have joined neighbours Manchester City in the race for Bayern Munich starlet Joshua Kimmich, according to Kicker (via the Metro).

Pep Guardiola’s Citizens were linked with a summer move for the 22-year-old a few weeks ago, but now the German outlet report that Jose Mourinho’s Red Devils are also keeping tabs on the versatile youngster.

The Bayern man, who started both of Germany’s internationals in the last two weeks, has been restricted to just ten Bundesliga starts under Carlo Ancelotti this term, as well as just three in their Champions League campaign thus far.

And it’s this lack of gametime which appears to have attracted the interest of the Manchester duo, especially given how well Kimmich broke into the Bayern team last season under current City boss Guardiola.

The 22-year-old made 23 Bundesliga appearances under the 46-year-old last term to quickly become an important member of the Spaniard’s line-up, and his versatility could be a huge asset to both United and City, as his ability to play at full-back and in midfield would be welcome at both clubs.

Guardiola is hoping to land a full-back this summer given that the contracts of Pablo Zabaleta, Gael Clichy, and Bacary Sagna expire, while Mourinho hasn’t yet found a replacement for Michael Carrick in the centre of his midfield.

Kimmich would be an invaluable signing for both bosses, so this could turn out to be a transfer saga that rumbles on for much of the summer.