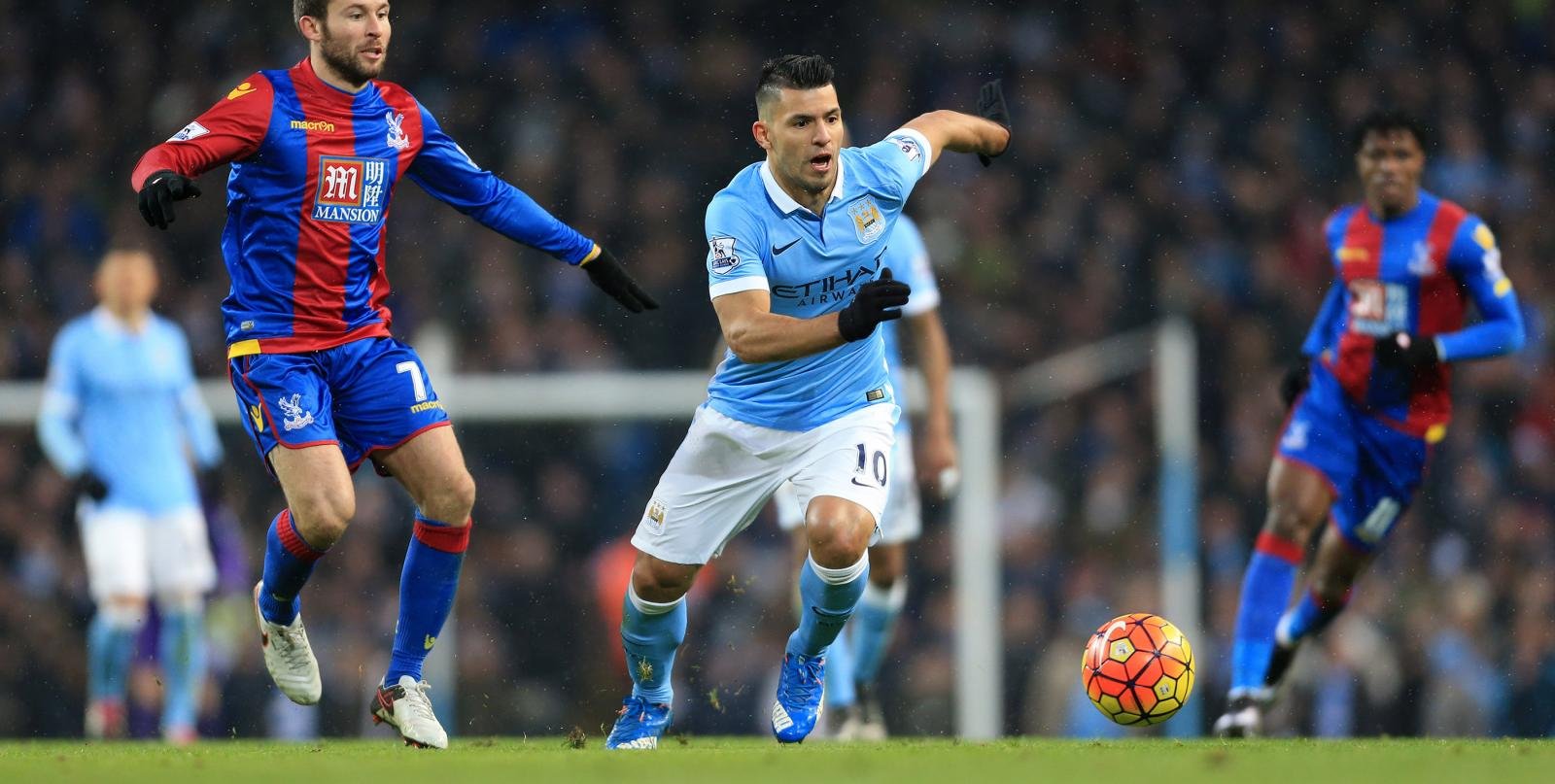 Manchester City closed the gap on Arsenal and Leicester City at the top of the Premier League with a 4-0 win over Crystal Palace.

Fabian Delph gave the hosts the lead with a rocket from distance, before Sergio Aguero’s deflected effort doubled the lead.

Aguero then grabbed a second after the break, before David Silva finished off a comfortable win for Manuel Pellegrini’s side.

City now sit third and just a point off the top, whilst Palace drop to eighth after their third straight loss.

Arsenal failed to extend their lead at the top on Sunday with a 0-0 draw with Stoke at the Britannia Stadium.

Petr Cech kept out any home efforts, denying Joselu and Jon Walters, who had a header cleared off the line, whilst Alex Oxlade-Chamberlain was stopped by Jack Butland at the other end.

Stoke stay seventh, whilst the Gunners remain top on goal difference, level on points with Leicester, who drew 1-1 at bottom side Aston Villa.

Shinji Okazaki squeezed the ball over the line to give the Foxes the lead before Mark Bunn saved Riyad Mahrez’s spot kick.

Claudio Ranieri’s side were made to pay for that miss when Rudy Gestede’s deflected strike sailed into the net past Kasper Schmeichel.

Remi Garde’s side remain bottom, nine points from safety, whereas Leicester stay second but are now just a point ahead of third-placed Manchester City.

In the big North-West derby, it was Manchester United who came out on top, beating Liverpool 1-0 at Anfield.

Wayne Rooney’s finish from close range, after Marouane Fellaini headed against the bar with 12 minutes remaining, was enough for the visitors to complete the double over their rivals this season.

Louis van Gaal’s side are now up to fifth, two points adrift of the top-four, whilst Liverpool are ninth and without a win in their last three league matches.

Spurs maintained their top-four challenge and outside title challenge with a 4-1 win over Sunderland at White Hart Lane.

Mousa Dembele put the home side ahead in the second-half, before another Eriksen strike and a Kane penalty sealed the win.

Mauricio Pochettino’s side stay fourth and five points behind the top-two, while Sunderland slip to 19th and are now three points from safety.

On Monday night, Swansea grabbed a crucial three points by beating Watford 1-0 at the Liberty in front of new head coach Francesco Guidolin.

Ashley Williams’ first half header was enough to hold off the Hornets and ensure they stayed a point above the bottom-three.

The defeat for Quique Sanchez Flores’ side, who are now 12th, is their fourth on the bounce, and the Spanish boss will be concerned by his side’s recent run of form.

Goals from Ayoze Perez and Georginio Wijnaldum put the Magpies 2-0 up after just 15 minutes and, despite a Nikica Jelavic goal after the break, they held on for an important victory.

Steve McClaren’s side remain in the bottom-three and a point from safety, whilst the Hammers slip to sixth after their eight-match unbeaten run came to an end.

A controversial equaliser deep into stoppage time meant Chelsea and Everton played out the third 3-3 draw of the week at Stamford Bridge.

The flurry of goals didn’t begin until early in the second-half when John Terry put through his own net and Kevin Mirallas struck to put the Toffees 2-0 up.

Two goals in two minutes though, through Diego Costa and Cesc Fabregas, had Guus Hiddink’s side level and on the front foot.

But the visitors thought they’d won it when Ramiro Funes Mori struck in injury time, only for Terry to back-heel home from an offside position in the 98th minuet to snatch a draw.

The champions have now drawn four of their last five matches and stay 14th, four points clear of the drop, whilst Everton are now 11th after their third successive draw.

Bournemouth beat Norwich 3-0 at the Vitality Stadium to end a run of four matches without a win.

Dan Gosling gave the Cherries the lead after 10 minutes, before a Charlie Daniels penalty and a debut goal from Benik Afobe wrapped up the points in the second-half.

Eddie Howe’s side move above the Canaries into 15th, leaving Alex Neil’s team just two points above the drop after back-to-back away defeats.

At St Mary’s, Southampton recorded their second home victory in a week as they comfortably beat West Brom 3-0.

A James Ward-Prowse double in the first-half had the home side ahead at the break, before Dusan Tadic sealed things in the second period.

Saints move up to 10th, seven points behind fifth-placed Manchester United, whilst Albion are 13th and just six points above the bottom-three.