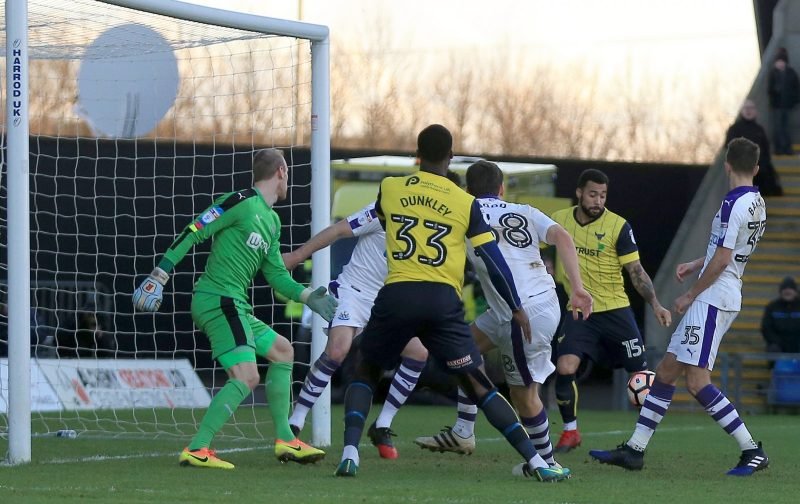 Non-league duo Lincoln City and Sutton United made history over the weekend as both caused big FA Cup upsets to reach the fifth round.

There have never been two non-league sides in round five, yet Darren Cowley’s Lincoln made it a genuine possibility by coming from behind to defeat Championship leaders Brightn 3-1 at Sincil Bank, with Richie Towell’s first-half strike cancelled out by goals from Alan Power and Theo Robinson, as well as an own goal from Fikayo Tomori, in the second period.

And then Paul Doswell’s Sutton made it a double non-league success by overcoming high-flying Leeds United 1-0 at Gander Green Lane on Sunday, with Jamie Collins’ penalty eight minutes into the second-half securing a last 16 berth for the National League side.

It wasn’t just the two non-league outfits that caused upsets though, as League One side Oxford United stunned Championship promotion contenders Newcastle United 3-0, while Wolves inflicted a third defeat in a week on Jurgen Klopp’s Liverpool after winning 2-1 at Anfield on Saturday.

There were also victories for Millwall and Fulham, who dispatched Watford and Hull respectively, while Mauricio Pochettino’s Tottenham needed a last-minute Son Heung-min goal to get past League Two high-flyers Wycombe Wanderers 4-3 at White Hart Lane.

In what was an exciting weekend of cup football around the country, here is What’s Hot and What’s Not from the fourth round weekend of the FA Cup…