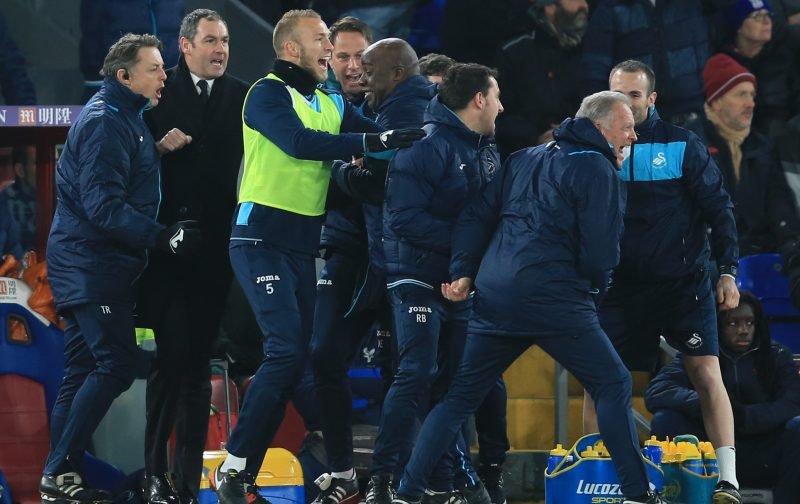 Arsenal came from 3-0 down to snatch a point away at Bournemouth on a thrilling Tuesday evening of Premier League action.

Arsene Wenger’s men were outplayed by the Cherries for much of the first half, and went in 2-0 down at the break thanks to goals from Charlie Daniels and Callum Wilson.

Eddie Howe’s Cherries then grabbed a third 13 minutes into the second period thanks to Ryan Fraser, but Arsenal were not to be denied, and goals from Alexis Sanchez, Lucas Perez, and Olivier Giroud rescued an unlikely point for the Gunners, although it does mean that they missed the chance to leapfrog Manchester City into third place.

Nonetheless, it was battling effort from the Gunners in the second half, who played against ten men for the final eight minutes after Simon Francis was sent off for a dangerous tackle on Aaron Ramsey.

Bournemouth remain ninth but are now only a point ahead of Stoke, who rose to 11th courtesy of a 2-0 win over struggling Watford, thanks to goals from Ryan Shawcross and Peter Crouch.

The evening’s other game saw new Swansea boss Paul Clement watch his side beat Crystal Palace 2-1 at Selhurst Park, with goals from Alfie Mawson and Angel Rangel cancelling out Wilfried Zaha’s excellent finish for the Eagles.

The win for the Swans puts them within a point of Sam Allardyce’s men, who suffered a fourth defeat in their last five matches.

In what was an exciting evening of Premier League action, here is What’s Hot and What’s Not from Tuesday’s top-flight games…