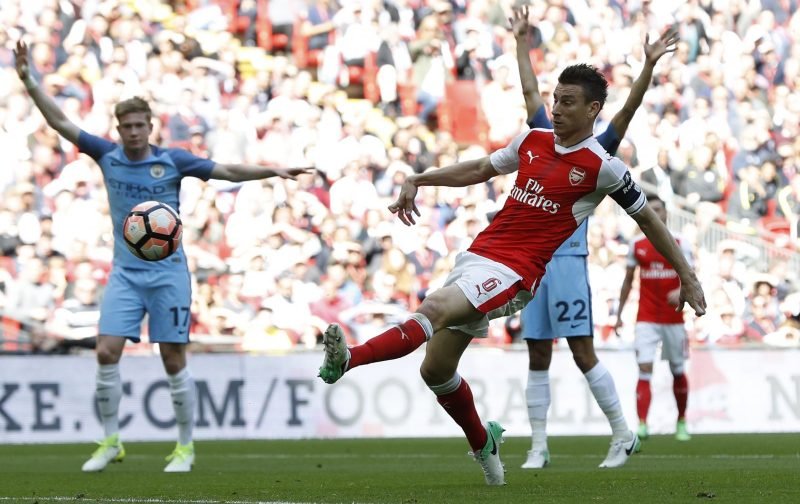 Manchester City’s Premier League top four chances took a hit on Sunday after they could only muster a 2-2 draw away at struggling Middlesbrough.

Pep Guardiola’s men had seen neighbours and fifth place Manchester United fail to beat Swansea just prior to kicking off at the Riverside Stadium, yet fell behind in the first half when former striker Alvaro Negredo finished from the edge of the box.

However, Brazil youngster Gabriel Jesus headed home five minutes from time to secure a point for Guardiola’s side, and thus keep them in fourth ahead of Jose Mourinho’s United with four games of the season remaining.

City are still favourites to secure that final Champions League qualification spot in what has been an otherwise underwhelming debut season for Guardiola, and it appears that he is already turning his attentions to who he may be able to bring in during the summer.

And one man they’ve been linked with in recent days is Arsenal defender Laurent Koscielny, who has appeared 288 times for the Gunners since moving there in 2010. 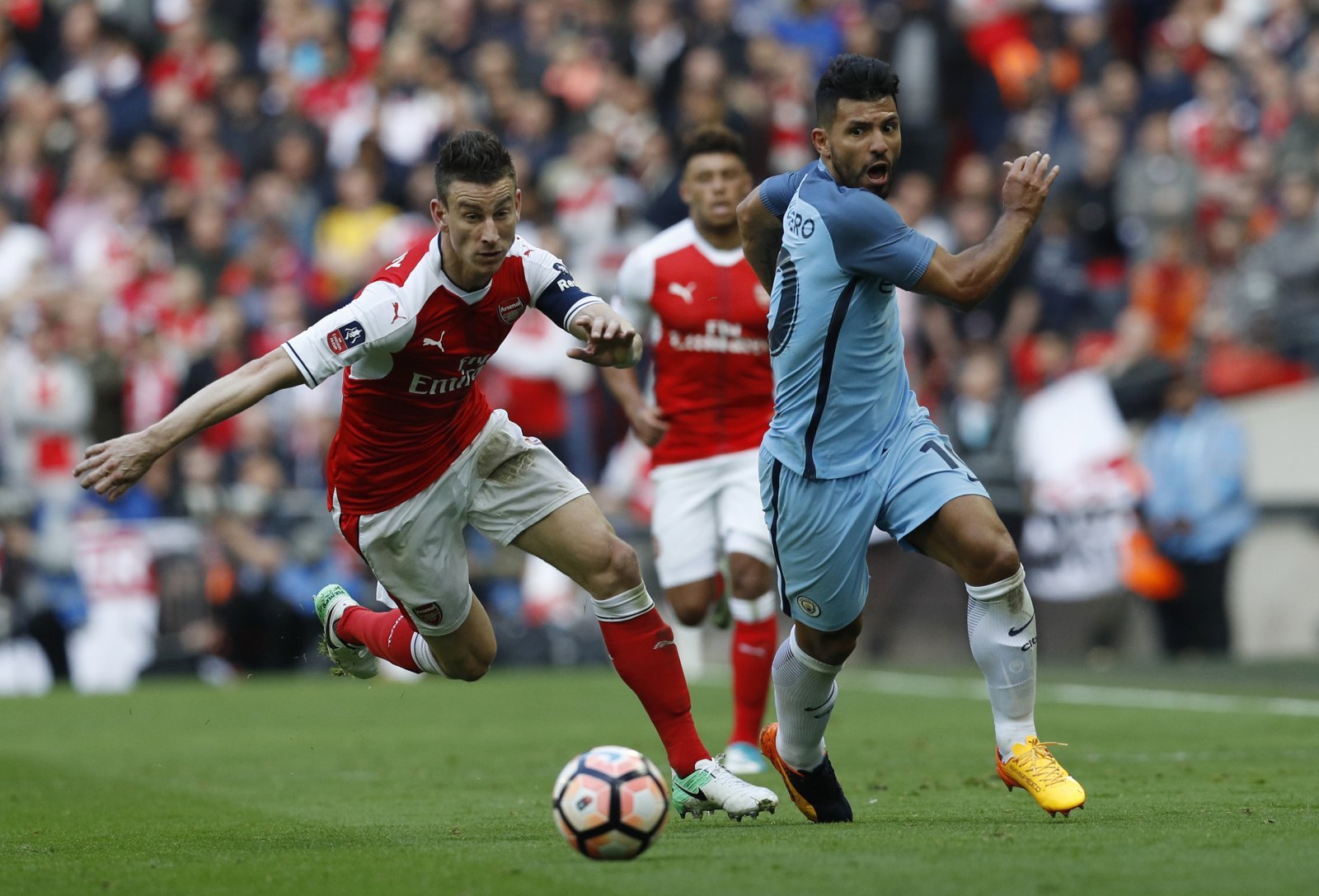 The France international was part of the Arsenal side that knocked City out of the FA Cup last weekend, yet Guardiola is clearly fond of the 31-year-old as he looks to solidify what has at times been a leaky Citizens backline this summer.

And that is why the Spaniard simply must get a deal done for Koscielny this summer, as the Frenchman is widely regarded as one of the best centre-backs in the Premier League.

The 31-year-old took time to adapt to English football when he first moved from Lorient back in 2010, yet he has slowly but surely become an integral member of the Gunners back four, and he’s the one manager Arsene Wenger has been trying to find a partner for over the past few years.

The likes of Sebastien Squillaci, Johan Djourou, Thomas Vermaelen, Per Mertesacker, and now Skhodran Mustafi have all been played alongside Koscielny and in some instances been brought in to strike a formidable centre-back partnership with the 31-year-old, yet it has been Koscielny who has been at the heart of the Gunners defence throughout the past seven years.

And when you look at the options Guardiola has at his disposal currently, Koscielny would make a significant difference to that backline. 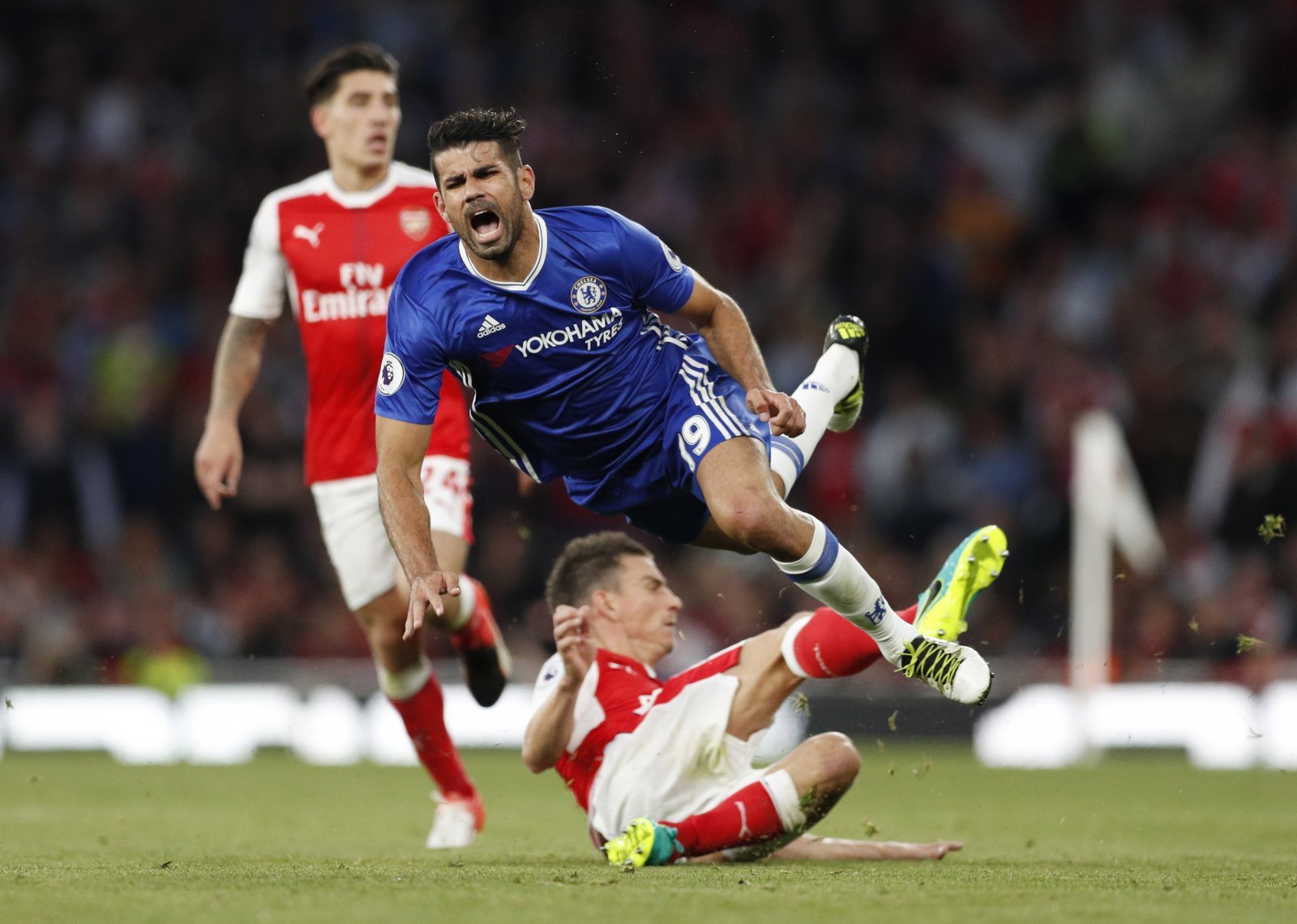 John Stones is someone Guardiola will back as he plays the game the way he wants it, yet occasionally over does it and sometimes makes critical errors at critical times, while Nicolas Otamendi can either be brilliant or hopeless, and Vincent Kompany is too injury-prone to be relied upon.

Ultimately, none of them have the consistency Koscielny does, and the experience he has accumulated during his career, both for Arsenal and France, would hugely benefit someone like Stones, who is looking to be a more expansive defender but still needs to understand the defensive side of the centre-back role.

Koscielny is hardly bad on the ball either – his pass completion rate this term is the same as Otamendi and Kompany’s (87%), but when it comes to out and out defending, which City have lacked this season, he trumps Stones comfortably, and more often than not beats Otamendi as well. 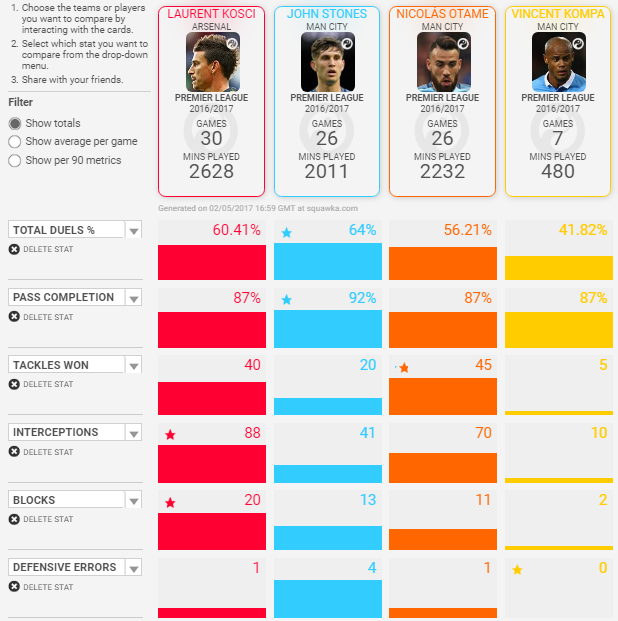 A Koscielny/Stones partnership would surely be the way to go for Guardiola (Stats provided by Squawka.com)

After a season in England, Guardiola will probably be aware that he needs defenders to be both expansive and able to defend, otherwise the former Barcelona and Bayern Munich will struggle to replicate his previous success at the Etihad Stadium.

Koscielny is exactly the type of centre-back they have missed this season – he gets blocks in, he reads the game to make interceptions, he will get his head on it at free-kicks and corners, but he can also play, he is comfortable with the ball at his feet (he plays for Arsenal after all).

At 31, the Frenchman would be perfect for someone like Stones to learn from and thus improve defensively, but he’d also be integral to Guardiola’s City, and with the Spaniard placing great pressure on himself to perform next season, he needs tailor-made Premier League defenders.

Koscielny is one of those.